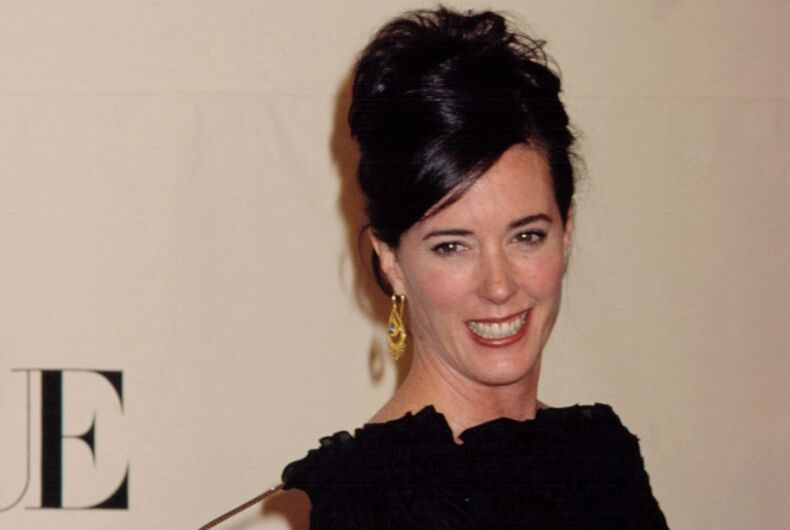 Designer Kate Spade was found dead in what police are calling a suicide.

The NYPD got a call and found Spade in her apartment at 10:30 a.m. The police has only said that she hanged herself and left a suicide note.

Spade co-founded of Kate Spade New York with her ex-husband Andy Spade, the brother of actor David Spade. Perhaps best known for her handbags, accessories, and line of houseware, Spade was an internationally renown designer.

Designers are mourning her loss. Liz Lange said on Twitter that Spade was “the nicest woman.”

The nicest woman, the first person to compliment me on Liz Lange Maternity when I first started. And the creator of the most iconic brand. I am heart broken by this news. https://t.co/teisqU6JK8

People who knew her also posted tributes to her.

Kate Spade was more than a designer. She had a quirky visual language that captivated Bat Mitzvah girls and artists alike. She was also a staple of NYC who spread good will. My heart breaks for her family. Thank you, Kate, from one of the millions you made feel beautiful.

#KateSpade, whose lively, colorful, and yes, joyous designs has died. My deepest sympathy to her family and friends, and her many fans around the world, who loved the wonderful illusions she created. I am stunned.

Me heart goes out to Kate Spade's family. May we all take note that we never know what goes on in someone’s life. Be kind to people today, even those you think have it all. https://t.co/1SFbSRfQK6

“I adore pretty things and witty words.” Rest In Peace #KateSpade, you’ve made generations of women feel more confident and supplied so many of us with bags that make us happy. pic.twitter.com/88u0jAUCpP

No! So much colour, so much joy, so much whimsy in her products… how awful that darkness took over. #katespade pic.twitter.com/4LnD1XLXWc

Heartbroken to hear about #KateSpade. My favorite designer who looked out for women of all shape & means. She was a beautiful and talented woman & while she brought so much confidence & happiness to other women, I am saddened she was missing in her own life. RIP

Dismissing depression and its effects on someone because you envy what they have is a failure to understand depression. It is relentless and cruel and unforgiving.#KateSpade

Most Americans disagree with ‘religious exemptions’ for businesses