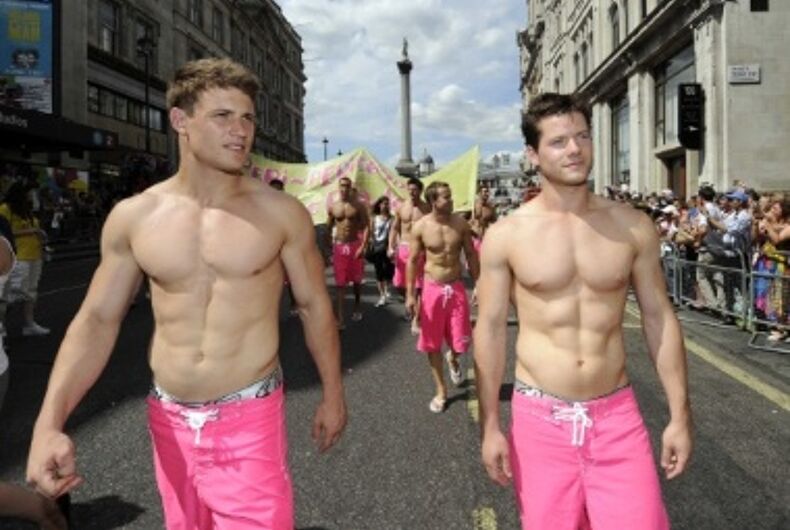 Shirtless men in pink swimming trunks. They no doubt inspired the million people in attendance at London’s 2010 Pride Parade.

The event, one of the world’s largest, had begun in 1972, in the third year of U.S. Pride celebrations. London’s attendance grew significantly during the debate over the controversial legislation Section 28, in the late 1980s.

It was the conservative era of the late Prime Minister Margaret Thatcher. Part of the Local Government Bill, Section 28 prohibited local authorities from promoting homosexuality. It was introduced, debated and implemented.

The discriminatory legislation sparked growing crowds at Pride, but Section 28 also prompted actor and activist Sir Ian McKellen to come out publicly and lobby against it. The much-honored actor said that when he visited the nation’s environment secretary, who responsible for local government, the secretary refused to change his position. But the guy had the gall to ask for an autograph. McKellen said he obliged with a written message: “Fuck off, I’m gay.”

Long before his much-recognized role in the Harry Potter series, McKellen was well known in Britain for Shakespearean roles. Among his many credits, he also appeared in friend Armistead Maupin’s Tales of the City miniseries, as well as the TV film And the Band Played On, about the discovery of the virus that causes AIDS. He had a recent run in the ITV/PBS comedy Vicious.

McKellen, with family ties to Manchester, was its parade grand marshal in 2015.

Emma Middlebrook is not your typical bodybuilding cover model