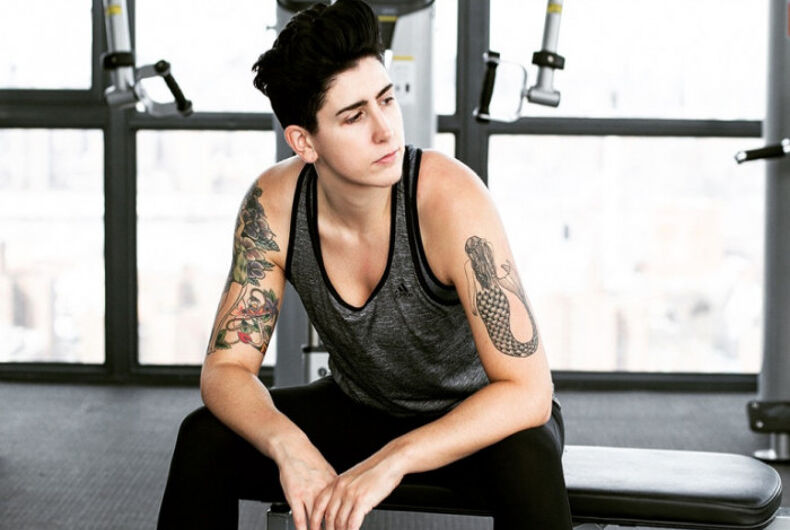 Amidst the feminine bodybuilders vying for the title as the next Ms Health and Fitness, you’ll see a distinctive contestant.

Emma Middlebrook is not one of the contestants with long hair, heels and augmented breasts. The 39-year-old personal trainer from Portland, Oregon, says she’s fine with that.

“I look at the women I’m up against, and we couldn’t be more different physically,” she said. “They’re feminine, they’re gorgeous, and here I am — tattooed, with a shaved head. It’s more of a masculine look.

“I’ve never seen anyone identify as the way I identify and be on a magazine cover like that.”

But that may be giving her an edge in what’s described as the world’s largest online fitness competition. At this point, Middlebrook is the top vote-getter in this round for her division.

It’s a vote-driven competition for the title, which comes with a spread in Muscle and Fitness Hers magazine and a $20,000 prize. Besides the free daily votes, you can also purchase votes as a fundraiser for the Wounded Warrior Project.

Middlebrook is a former accountant who now has 15 years of experience in personal training. She works with a range of clients across the country from her home base in Portland, where she lives with her girlfriend, journalist Mary Emily O’Hara.

She says her clients are all over the spectrum. “I work with teenagers, senior citizens, male, female, gay, straight, trans … almost everyone,” Middlebrook said.

“I’m always impressed with any woman who goes to a gym and wants to lift weights,” she said. “I think that’s very cool.”

She said she appreciates all her clients, but especially those who are transgender.

When you’re transitioning, she said, “it’s almost like you’re learning your whole body again. Most feel uncomfortable in a gym setting. I’m a no-judgment, free zone.”

Middlebrook said she works with clients in parks, in gyms, wherever they feel comfortable.

“I like working with people like that — someone who’s struggled with their body but now wants to be in control of it. I can help you get the body you want.”

Besides training clients, she’s also in training herself. “I’m doing what I always do. I stay healthy and eat well.”

She noted her body is very different than someone who would be competing in the International Federation of BodyBuilding & Fitness.

“I’m not a bodybuilder or a bikini model,” she said. “I’m coming at it from a different angle.”

There’s a ways to go in the voting — after the first round is a wildcard round, then semifinals, then finals. Middlebrook said she’s encouraged so far.

“I have a strong Instagram following. I network a lot. I work with a lot of people. I’ve apologized for my shameless self-promotion,” she said with a laugh.

“I think, based on the attention that I’m getting, I’ll probably make it quite far,” she said. “But when it comes to actually winning, you just never know.”

“I don’t see it as butch, femme — I find that language very interesting, but I don’t feel either way about myself.

The next season of Supergirl will include a transgender character