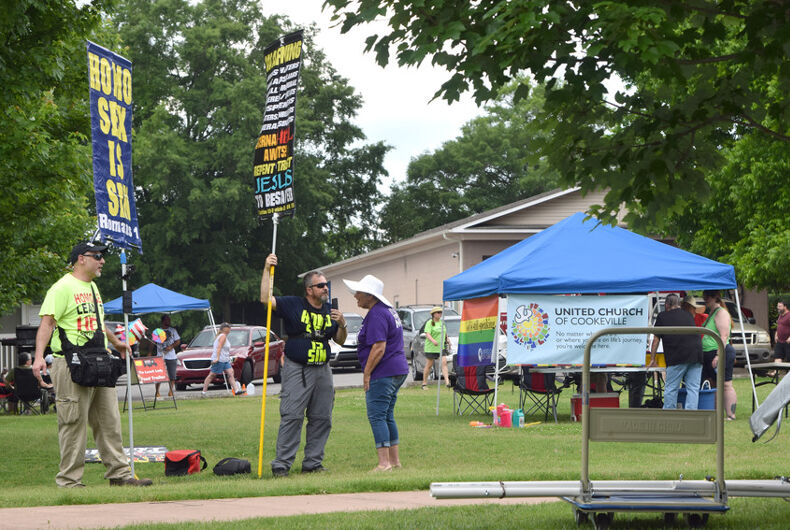 Timothy J. Brown attended the Upper Cumberland Pride Festival in Cookeville, Tennessee last June, but was asked to stay 50 feet away from the event. Now he wants compensation from the city.

At last year’s event, Brown and two other men showed up with a signs bearing anti-gay bible verses and other statements, and harassed event attendees. The Cookeville police were summoned, and officers asked Brown and his companions to move away from the event.

In response, Brown, who goes by “Timthebaptist” on YouTube, filed a suit against the city, claiming that he was simply, “exercising his constitutional rights and free exercise of religion by peacefully sharing his Christian message in a public park in the city,” when he was threatened with arrest.

Upper Cumberland PRIDE had rented a portion of the park for their event.

In his suit, Brown claims the city’s code, “unconstitutionally compels plaintiff to move out of a traditional public forum” by asking him not be within the event in question. He prefers a more unfettered freedom to express his opinion during the event.

Amongst the demands in his lawsuit, “plaintiff sought, and continues to seek, to discuss issues from a religious perspective, to distribute religious literature, to display signs and to engage in religious speech through sharing his faith. Plaintiff was deprived of his right under the First Amendment to the United States Constitution to engage in free exercise of religion activities prohibited by the code, as interpreted and enforced by defendants.”

He is requesting a trial by jury over the “injuries” he has faced by not being allowed access to the event, and is asking that the city not be allowed to enforce its code, as well as “nominal and/or compensatory and/or special and/or punitive damages” in addition to his attorney’s fees.

Brown is being represented in part by the American Liberties Institute, a part of the right-wing Alliance Defending Freedom. The ADF was also involved with the recent Masterpiece Cakeshop lawsuit.

At the 2018 Upper Cumberland Pride Festival, Brown and another man, Marvin Heimen, again showed up, signs in tow. The police did not intervene, and event participants did not choose to interact with Brown and Heiman.

Here are the heartwarming LGBTQ moments from the Tony Awards