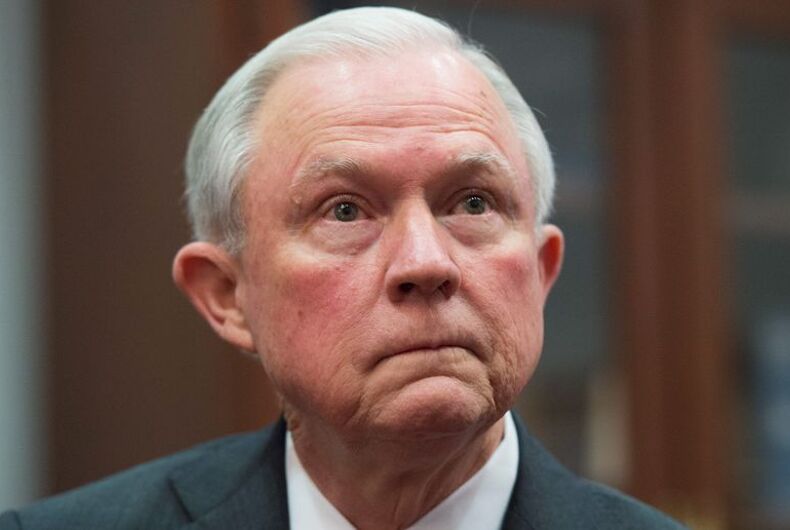 Attorney General Jeff Sessions has issued a new order in his never ending quest to keep the U.S. as white and straight as possible. In a wide-reaching move, Sessions says that the government will no longer accept the threat of gang violence or domestic abuse as grounds for asylum in the U.S.

“The mere fact that a country may have problems effectively policing certain crimes — such as domestic violence or gang violence — or that certain populations are more likely to be victims of crime, cannot itself establish an asylum claim,” Sessions wrote in a 31-page memo to immigration judges.

The order is going to disproportionately affect LGBTQ asylum seekers, many of them the victims of gang violence in their home countries. In fact, Sessions all but called LGBTQ asylum seekers out in his memo by refering to “certain populations.” In essence, Sessions said, it’s not America’s problem if you’re going to be killed for being gay or trans.

The heartlessness at the center of Session’s decision is illustrated by the specific case that spurred it. Ms. A.B.–court filings use only her initials–fled El Salvador after enduring years of violence, including rape, at the hands of her husband. She went to the local police, who did nothing. Finally, she came to the U.S., seeking asylum.

An immigration judge had ruled that what she endured was “criminal,” but still ruled against her claim. Ms. A.B. filed an appeal and won. Now she faces deportation after all.

LGBTQ advocacy groups were quick to condemn Session’s order. The National Center for Lesbian Rights called it “an unpricipled setback that overturns years of precedent.”

“The Attorney General’s decision in Matter of A-B- will certainly make it harder for many refugees to secure the safety they deserve,” the group said. “However, this decision does not, nor could it, strip lesbian, gay, bisexual, transgender, queer, and HIV-positive people of the right to be protected.”

Criticizing the Trump administration’s immigration policy for cruelty is actually a badge of honor for Sessions and other hard-liners. After all, this is the administration that happily separates children from their families at the border, telling parents that the children are being taken away for a bath.
Sending LGBTQ immigrants back to their deaths is just all in another day’s work.
News
Anti-LGBTQ violence, immigration, Immigration Equailty, Jeff Sessions, LGBTQ asylum seekers, National Center for Lesbian Rights (NCLR)