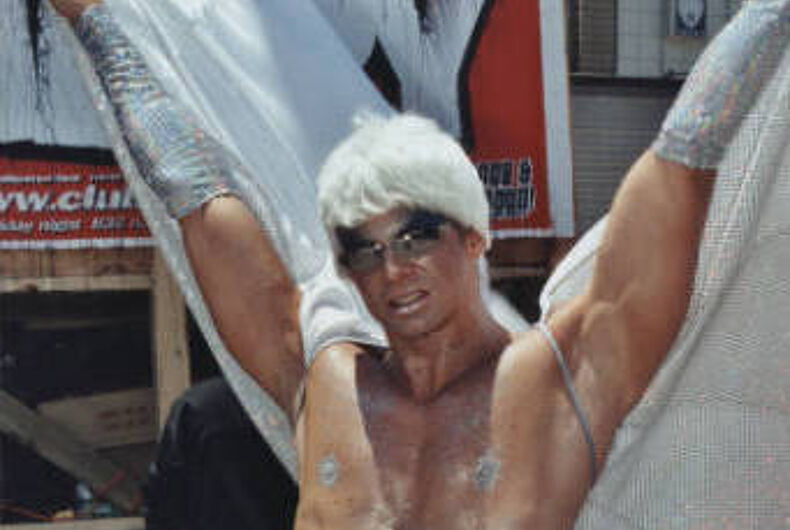 There’s just something about gays and glitter.

As if this angel at the 1999 Los Angeles Pride Parade needed any extra sparkle — yet we really don’t mind, do we?

Glitter and glam and all things gay may describe our penchant to make things better. Yet glitter has its historical context in gay protest.

But, first, before glitter, there was pie. The notorious Anita Bryant, orange-juice-pitchwoman-turned-anti-gay-mouthpiece, became best known for a pie-in-the-face protest on Oct. 27, 1977, in Des Moines, Iowa.

By 2011, the pie had turned to glitter, when Minnesota activist Nick Espinosa dumped glitter on Newt Gingrich, the conservative former Speaker of the House turned talk-show host.

As a sociology doctoral candidate at the University of Maryland, Anya M. Galli Robertson also described how gays protested incoming vice president Mike Pence with glitter just before the 2017 inauguration. Then, on Ash Wednesday 2017, a New York group organized some LGBTQ-supportive Catholics to mix purple glitter into ash crossed onto foreheads.

Writing for the site The Conversation site, she said creative and confrontational protest tactics have been a central element of our movement.

“Purple glitter transformed a solemn act symbolizing faith, repentance and the inward reflection that takes place during Lent into a ‘fabulously conspicuous’ expression of love,” she wrote.

No doubt, our 1999 Pride angel would approve.