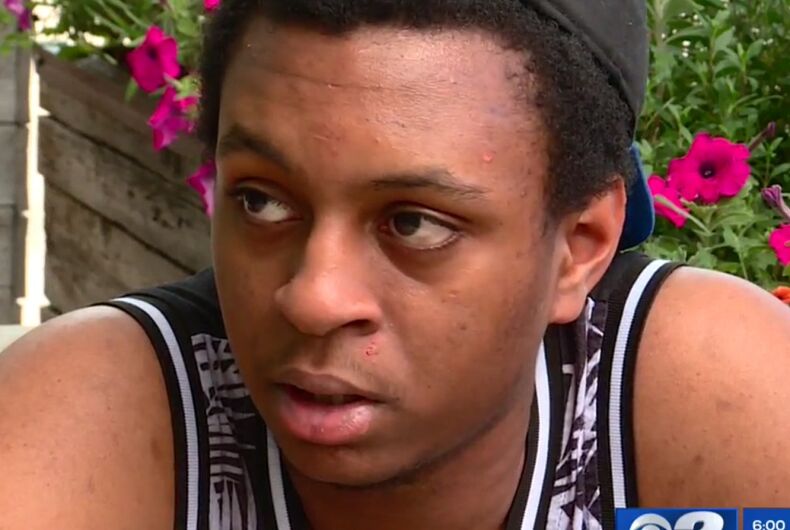 Terrance Mannery is being hailed as a hero after he single-handedly saved two pride-goers who were being chased by a mob of homophobes.

Mannery, who works at the Doki Doki dessert shop, said that two men ran into the shop at around 10 p.m. this past Saturday and looked scared. They were coming from the Utah Pride Festival.

“I noticed some men come in and they seemed distraught and afraid so I asked them what was going on,” he said. “They said they were being harassed and followed.”

He said he tried to lock the door when he saw around ten men approaching shouting anti-gay slurs, but he was punched and pushed hard enough to break the door’s hinge.

Mannery ended up outside.

“Based on the actions the group was making, based on everything the gentlemen who came in had told me — if I allowed anyone in the store, they would try to cause harm to people,” he said. “I couldn’t see how big the group was. I thought, It’s just seven to ten people. Maybe they’ll back off.”

“It felt like they were trying to pull me out so they could all jump on, but I was trying to push them out, so that actually worked in my favor.”

Other people in the shop tried to help Mannery, but they were stopped by a stack of chairs that fell in front of the door. Bystanders called the police while they watched the employee get hit.

He was hit seven times and suffered minor injuries before a security guard from a nearby business showed up and the mob ran off.

One witness was surprised that people in “that age demographic” could be homophobic.

“When I found out it was a hate crime, I was shocked,” said Turpin. “I couldn’t believe it. I thought all the kids in that age demographic were beyond that homophobic behavior.”

Mannery said that he was just doing what he knew to do: stand up to bullies.

“I don’t want anyone to be hurt,” he said. “I just saw the group as a group of bullies. I figured, if someone is going to stand up to them and stop them, it’s going to have to be me. Everyone else in the store has kids, or they’re a little older — they’re not the ones I expect to go out and say, ‘No.’”

Police believe that there were ten to fifteen attackers, but none of them have been caught. The attack was not captured on video.

Detective Greg Wilking said Salt Lake City Police are unsure if this is a hate crime. “They’re not directing their anger and their physical assault at [Mannery] because of his sexual orientation, so it’s kind of a gray area for us,” he said.

The Utah Gay and Lesbian Chamber of Commerce is offering a $5000 reward for information on the attack.