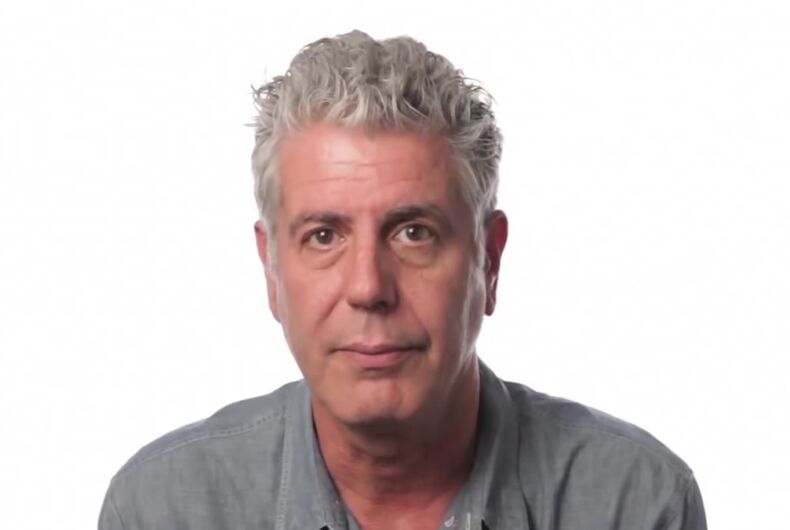 Chef and TV personality Anthony Bourdain died today at age 61 in what CNN called a suicide.

“It is with extraordinary sadness we can confirm the death of our friend and colleague, Anthony Bourdain,” the network said in a statement this morning.

Bourdain was a known supporter of LGBTQ equality. In 2014, he participated in an HRC campaign to support marriage equality.

“What sensible person could be against that?” he said. “The desire to love and to be responsible to another person, to commit to another human being. These are virtues.”

Even before that, he was calling out homophobes.

To which Bourdain responded: “Dear Brown Coffee: God called. He said you suck.”

Bourdain rose to national fame with the publication of his best-selling Kitchen Confidential: Adventures in the Culinary Underbelly in 2000.

The book helped cultivate his image as macho. The Smithsonian called him “the original rock star” of the culinary world and “the Elvis of bad boy chefs.”

The kitchen culture that made Bourdain famous, he acknowledged, was homophobic and misogynist. This passage from Kitchen Confidential describes it in one professional kitchen:

The tone of the repartee was familiar, as was the subject matter – and I realized that, my God . . . I’ve been listening to the same conversation for 25 years !

Who’s the bigger homo? Who takes it in the ass? Who, exactly, at this particular moment, is a pédé, a maricón, a fanocchio, a puta a pato? It’s all about dick, you see.

He said it “might be right” to call the language homophobic and sexist. But he justified it, writing, “What the system seeks, what it requires, is someone, anyone, who can hold up their station, play the game without getting bent out of shape and taking things personally.”

That was in 2000. By 2017, he regretted his participation in that culture, as he said in an interview with Slate:

You know, to the extent that I was that guy, however fast and however hard I tried to get away [from] it, the fact is that’s what my persona was. I am a guy on TV who sexualizes food. Who uses bad language. Who thinks our discomfort, our squeamishness, fear and discomfort around matters sexual is funny. I have done stupid offensive shit. And because I was a guy in a guy’s world who had celebrated a system—I was very proud of the fact that I had endured that, that I found myself in this very old, very, frankly, phallocentric, very oppressive system and I was proud of myself for surviving it. And I celebrated that rather enthusiastically.

I mean, I became a leading figure in a very old, very oppressive system so I could hardly blame anyone for looking at me as somebody who’s not going to be particularly sympathetic.

Bourdain was in France working on an episode for CNN’s Parts Unknown when he died. He was found in his hotel room by friend and fellow chef Eric Ripert.

I am shocked and deeply saddened. RIP to a father, partner, chef, writer, and incredibly talented man. @Bourdain ❤️ Prayers for his loved ones.

Could this new more inclusive flag replace the rainbow flag?