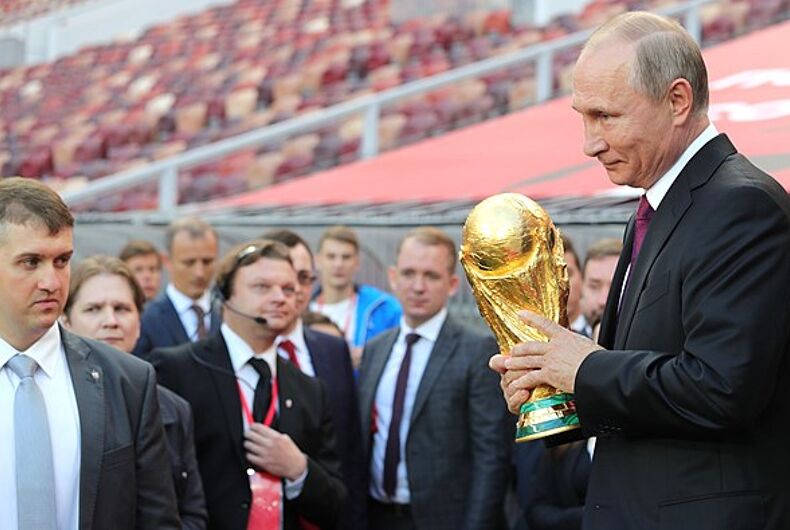 FIFA, soccer’s world governing body, has opened disciplinary hearings against Mexico after its fans made anti-gay chants during a World Cup win over Germany on Sunday.

As the German goalkeeper prepared to take a goal kick in the 24th minute, some Mexican fans taunted him with the gay slur, puto. Then, after the game, some Mexican fans chanted “El que no salta es un chileno maricón” — “He who doesn’t jump is a Chilean faggot.”

Mexico won the opening-round game 1-0, a stunning victory against Germany, which hadn’t lost a World Cup opener since 1982.

FIFA has been running a month-long educational campaign threatening expulsion of fans making anti-gay chants. But FIFA itself has a checkered history on LGBTQ issues in particular and corruption in general.

Gay football fans have feared attending World Cup games in anti-gay Russia. The 2022 games have been awarded to Qatar, with an even worse track record on human rights. The United States, Canada and Mexico have been named the 2026 site.

Related: The World Cup has barely started but gay fans are already being bashed & arrested in Russia

But inside the World Cup stadiums, a couple of Pride flag demonstrations are making their mark.

In the June 14 opening game in Moscow, Russian LGBQT activist Alexander Agapov waved a Pride flag in the stands after each of Russia’s five goals as it shut out Saudi Arabia. Agapov also waved it during the speech of Russian President Vladimir Putin.

And today, in Volgograd, Russian, you could see some Pride during a match between England and Panama — if an English fan is able to follow through on her plan.

Di Cunningham, an LGBTQ campaigner who works with English soccer, said she will unfurl a Pride banner during the game — inside the stadium, where Russian authorities have promised freedom to do so.

For Cunningham, it’s a far different situation at home. She leads the Three Lions Pride group, and more than 40 British soccer clubs now offer rainbow-colored versions of their insignia. But before this World Cup, Three Lions faced email threats.

“When you travel abroad, you always have to try and respect the local customs,” Cunningham told Reuters. “For LGBT people, certainly here, it means taking account of attitudes and laws, and so I certainly won’t be hoping to break any laws or offend anybody.”