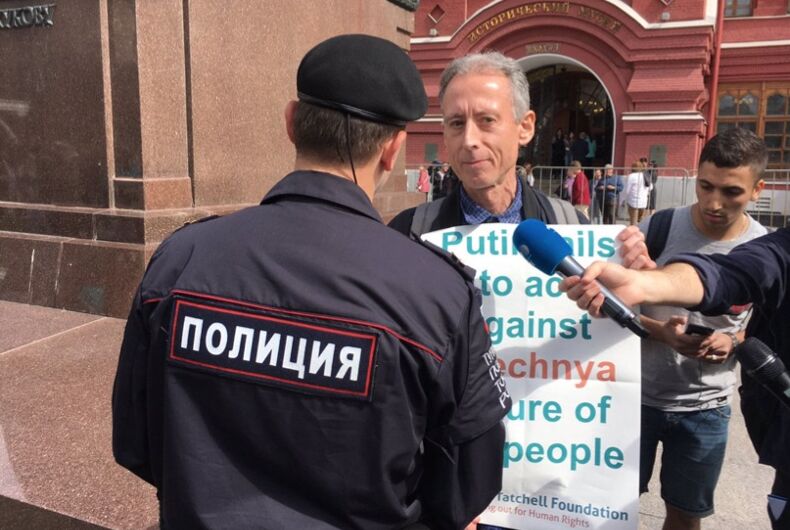 English activist and politician Peter Tatchell being arrested by Russian police during the World Cup.Photo: Twitter/petertatchell

LGBTQ fans and advocates have decried FIFA’s choice of Russia to host the World Cup this year, saying the notoriously antigay country would be unsafe for LGBTQ fans. While the sporting authority and the Russian government have tried to downplay the concerns, two fans have already been brutally attacked before the games have even started.

French citizen O Davrius and his partner had traveled together to Russia to cheer on French athletes according to Metro UK, but the first match had yet to be played before the two were attacked after catching a cab and left with serious injuries.

Davrius suffered head and brain injuries and a fractured jaw. His partner was left “disabled” after the attack according to Russian media reports.

“Even though the injured are homosexuals, it does not justify the monsters who beat him,” one outlet concluded.

Two men have been arrested in the attack.

British politician and activist Peter Tatchell was also arrested this morning as he protested Vladimir Putin’s tacit approval of Chechnya’s ongoing pogrom torturing and killing gay men. He was detained holding a sign that read, “Putin fails to go against Chechnya torture of gay people.”

“Getting arrested is standard for Russians who protest for LGBT+ rights or against corruption, economic injustice and Russia’s annexation of Crimea and its bombing of’ civilians in Syria,” Tatchell told British outlet Gay Star News.

“Unlike brave Russian protesters, I have the ‘protection’ of a British passport, which means I have been treated more leniently than they are.”

“Little action has been taken by the Russian government and police to crack down on far right extremists who target LGBT+ people for violent and humiliating assaults – including the instigators of the current threats to bash and stab LGBT+ football fans at the World Cup,” Tatchell said.

While FIFA and the Russian government made ludicrous claims that queer fans would be safe and would not be arrested for waving rainbow flags or displaying public affection under the nation’s “gay propaganda” laws, activists were quick to warn fans that the promises were bogus.

Russian vigilantes have threatened to “root out and stab” LGBTQ fans and Cossacks providing security for the games have said they will report gay fans who kiss to the police.