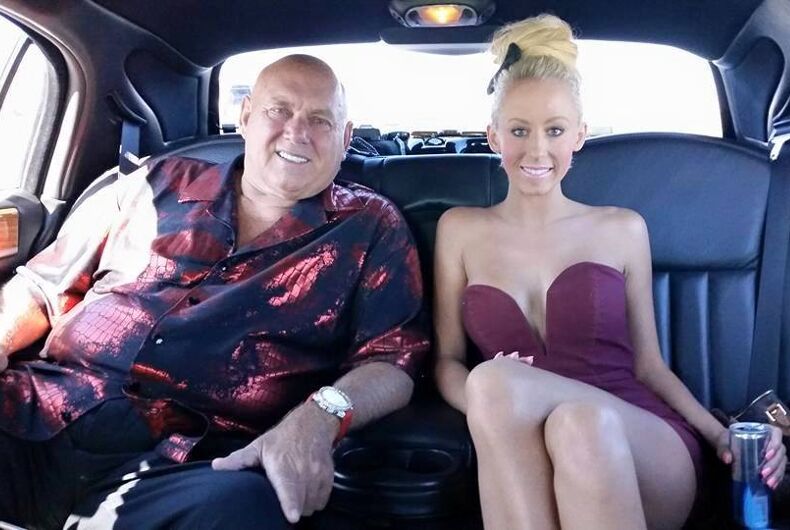 The evangelical fervor for Donald Trump has long stretched credulity. A thrice-married casino owner who has faced multiple allegations of adultery seems the least likely repository for evangelical hopes.

But just when you think the hypocrisy has gone as far as it possible can, along comes Dennis Hof.

Hof, 71, is seeking a seat as a Republican in the Nevada state legislature. He styles himself “the Trump of Pahrump,” the town in which resides.

Hof also happens to be a pimp. He owns five brothels, including the Moonlite Bunny Ranch, and a strip club. His sex empire that has made him a wealthy man. He’s appeared on an HBO reality series and even written a book about it: The Art of the Pimp.

A man who made his fortune as an actual peddler of flesh should give Christian voters pause. In Hof’s case, not so much. Instead, evangelicals lined up to vote for him and engaged in mental acrobatics to justify their support.

“We have politicians, they might speak good words, not sleep with prostitutes, be a good neighbor,” pastor Victor Fuentes told Reuters. “But by their decisions, they have evil in their heart. Dennis Hof is not like that.”

Indeed, Hof has capitalized on evangelical comfort with the complete disconnect between Biblical values and candidates that Donald Trump pioneered.

“People will set aside for a moment their moral beliefs, their religious beliefs, to get somebody that is honest in office,” he said. “Trump is the trailblazer, he is the Christopher Columbus of honest politics.”

While it’s true that Trump is a trailblazer, he also lies on average nine times per day.

Hof shares another characteristic with his hero. He’s been accused of sexually harassing his employees.

A former sex worker claimed that Hof raped her years ago, a charge Hof denies. His supporters dismiss the claims as lies, just as Trump’s and Roy Moore’s supporters did.

That conservative Christians would set aside core Biblical principles to support Hof underscores just how synonymous the religious right is with the Republican party. But then again, we already knew that.