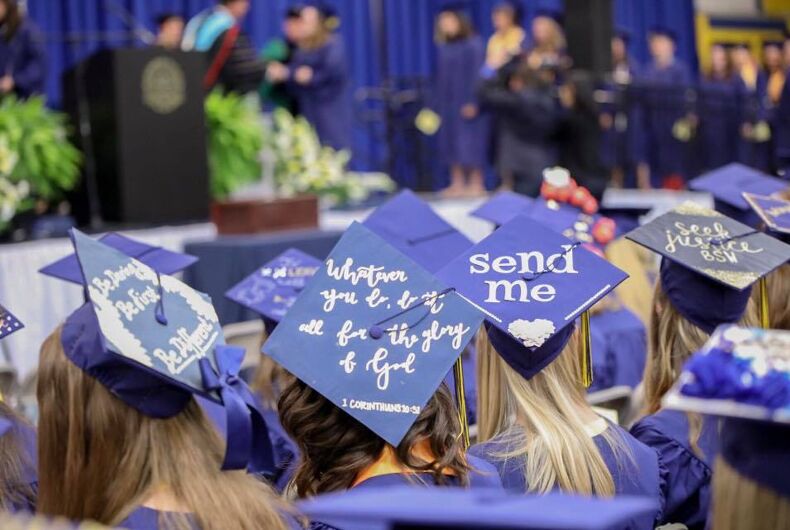 Christian colleges have a well-deserved reputation as enforcers of traditional morality. Students often have to sign “lifestyle contracts,” forbidding them from engaging in premarital sex or using alcohol or drugs. They also often have to accept a “faith statement” that condemns homosexuality as a sin.

But the colleges are increasingly being challenged for their position. In a twist, the opposition to the schools’ policies aren’t coming from outside, but from the schools’ own LGBTQ students.

As much as the colleges would like to pretend that LGBTQ people don’t exist on their campuses (or at least are trying to pray away the gay), the students themselves are making their presence felt. More to the point, they are making it clear that they don’t agree with the traditional teaching that homosexuality is an affront to God.

While many LGBTQ students remain closeted and struggle with their colleges’ condemnation, increasingly students are willing to speak out. The Pulse, the student paper at Spring Arbor University, ran an article last February about what life was like for LGBTQ students on campus.

“I always kind of joke that SAU has made me a better Christian but not in any of the ways they intended to,” Caitlin Stout, who graduated last year, told the paper. “The LGBT community, both on this campus and at large, has kind of been the group of people who have shown me what church should look like.”

That’s the kind of comment that sends hard-core Christian conservatives into orbit. Everett Piper, president of Oklahoma Wesleyan University, responded by equating being gay with being a white supremacist.

“How about ‘a conversation about how to bring feelings of white supremacy and faith into the light’ at the local Christian college?” he wrote in a response quoted in The New York Times. He added, why “do we ‘normalize’ one sinful habit and predisposition but yet still condemn another?”

The problem that Piper and others like him are running up against is that many of the colleges’ own students just don’t agree, and not just the LGBTQ students. In general, millennial evangelicals are far more likely than their elders to think that being gay is not a big deal.

“Millennials are looking at the issue of gay marriage, and more and more they are saying, ‘OK, we know the Bible talks about this, but we just don’t see this as an essential of the faith,’ ” Brad Harper, a professor of theology and religious history at Multnomah University, told NPR.

Indeed, a Pew Survey shows that a majority of millennial Christians believe homosexuality should be accepted. They are evenly split about accepting marriage equality. By comparison, only about a third of evangelicals in general support same-sex marriage.

LGBTQ students say that their own experiences show that their peers are much more open than the institutions they attend.

“People I’ve met in the English Department, even in my dorms, they’re like, ‘Oh, you’re queer? OK, cool. Do you want to go get pizza?,’ ” Sam Koster, a junior at Calvin College, told NPR.

The issue isn’t going to go away, even when the students graduate. Many of the students at Christian colleges report that they are finding a way to square their sexuality with their beliefs.

Mark Yarhouse, director of the Institute for the Study of Sexual Identity at Regent University, told The Times that in his recent longitudinal study of 160 gay students at 14 Christian colleges, 80 percent found a way to reconcile their identities.

That makes LGBTQ graduates of Christian colleges potential change agents for the evangelical movement. (It’s also a worry for the Republican party, which relies upon evangelical voters.)

While any major changes are years away, that they are happening at all is a good development. As it turns out, even in the institutions meant to uphold current conservative values, reality cannot be held at bay.