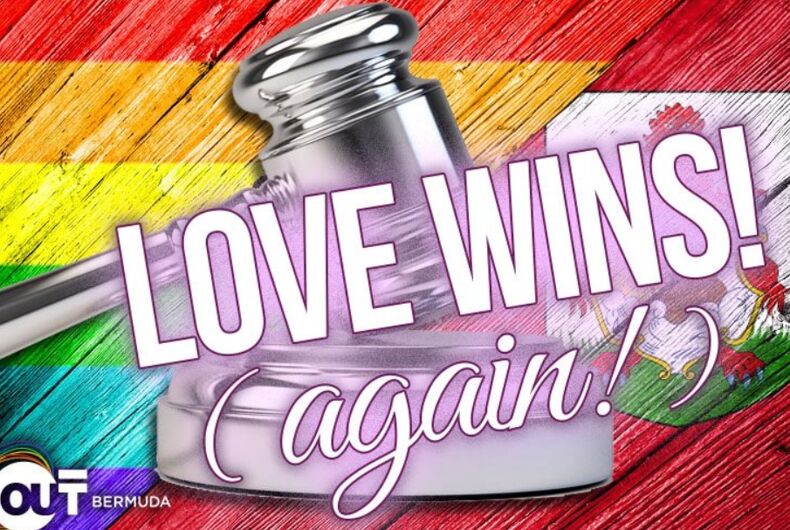 Last year, the same court ruled that the country’s marriage law was “inconsistent with the provisions of the Human Rights Act as they constitute deliberate different treatment on the basis of sexual orientation.”

Today Chief Justice Ian Kawaley issued a ruling against the Domestic Partnership Act in a crowd-funded legal challenge to the bill, making Bermuda the first country in the world to legalize marriage equality for a second time.

The organization OUTBermuda filed a lawsuit on behalf of Maryellen Jackson, which was joined to another legal challenge. The original plaintiffs from last year’s Supreme Court ruling were not involved in this new challenge.

Justice Kawaley ruled that the Domestic Partnership Act’s ban on marriage equality violated the Bermudian constitution’s “right to freedom of conscience and creed.”

“Love wins again!” said OUTBermuda’s Zakiya Johnson Lord and Adrian Hartnett-Beasley in a statement. “Our hearts and hopes are full, thanks to this historic decision by our Supreme Court and its recognition that all Bermuda families matter.”

“Equality under the law is our birthright, and we begin by making every marriage equal.”

#LoveWinsAgain for @OUTBermuda and all Bermudians. Thank you to Maryellen Jackson and @RodFerguson for joining us in our firm belief that all Bermuda residents deserve the #FreedomToMarry. pic.twitter.com/1EEk01DrfH

American LGBTQ activists celebrated the ruling as well. “Today the Bermuda Supreme Court affirmed what we already know – that love can never be rolled back and that all loving and committed couples deserve the protections that only marriage affords,” said GLAAD President Sarah Kate Ellis.

The Domestic Partnership Act went into effect last Friday. The Supreme Court ruling should go into effect today, meaning marriage equality was banned for less than a week.

Carnival Cruise Line, which was offering destination wedding packages to Bermuda before the Domestic Partnership Act was passed, provided some of the funding for the lawsuit.