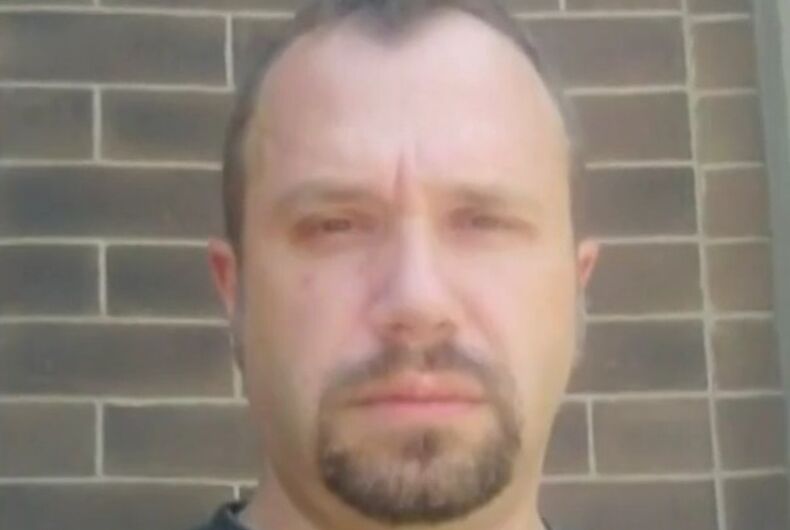 A Pittsburgh man was arrested this past Saturday and is accused of decapitating his ex-boyfriend.

Police got a call from the mother of Kevin Thompson, 46, who said that she went to her son’s home because he wasn’t responding to her phone calls, his car was missing, and his boss said that he hadn’t been going to work for several weeks.

When she entered his home, she saw blood stains in the kitchen and was afraid to look further. She called the police.

According to the police report, Detective Edward Fallert smelled the odor of a decaying body, which he believed came from a shed in the yard. When he searched the shed, he found Thompson’s torso in a white trash bag, his limbs and his head in other bags.

Police found blood on the floor, ceilings, and walls all around the house. They believe that a violent attack started on the second floor and went down to the first. The torso had multiple stab wounds.

After the local news reported the crime, two witnesses came forward to say that John Dickinson, 42, Thompson’s ex-boyfriend and current roommate, said he committed the crime.

One of the witnesses said that Dickinson complained that Thompson made a sexual advance toward him, and that led to a fight.

“During this altercation, Thompson stated to Dickinson, ‘You killed me, you killed me,'” a witness said Dickinson said.

Another witness said that Dickinson was staying with him and left a notebook. In the notebook, Dickinson wrote, “This is John Dickinson. I am responsible for the death of Kevin Thompson. I had no help whatsoever. I told no one what I did.”

A friend, who does not want to be named, told KDKA-TV that Dickinson and Thompson dated in the 90’s.

“John moving in with Kevin, would’ve known full-well what Kevin would be thinking. He would know that Kevin was thinking that John wanted to get back together with him,” the friend said.

Dickinson had just gotten out of jail. He has had multiple run-ins with law enforcement, starting in 1996 when he pled guilty to felony robbery, burglary, and conspiracy. In 2008, he was sentenced to five to ten years in prison for aggravated assault and robbery.

The friend told KDKA-TV that he too had had a violent encounter with Dickinson.

“He stabbed me in my leg over a simple statement that I wasn’t going to hang with him that evening,” he said.

The friend said that Thompson may have been trying to help Dickinson get back on his feet. “Kevin was a wonderful person. He tried helping people.”

Dickinson is scheduled to appear in court this week. He faces multiple charges, including criminal homicide and abuse of a corpse. His bail was denied.

It is not known if he will use the alleged sexual advance as an excuse for killing his ex-boyfriend.