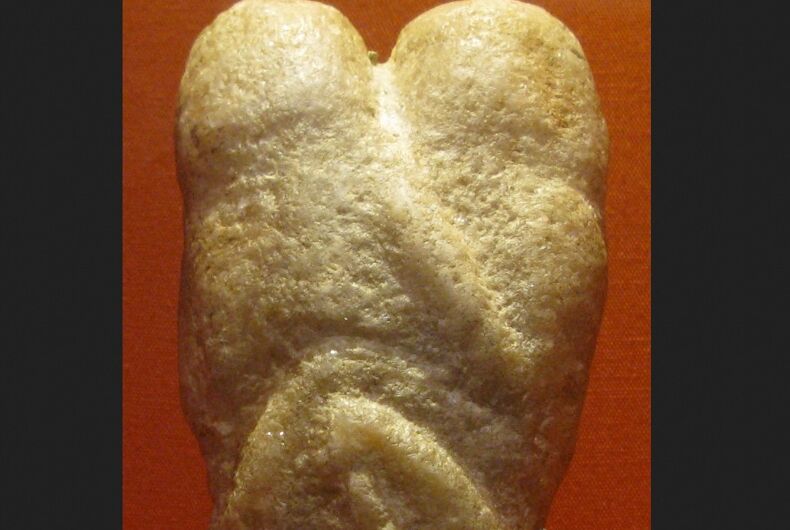 Objects that depict 11,000 years of LGBTQ history from the British Museum will be going on tour.

One of the items displayed in the exhibit will be the Ain Sakhri sculpture, believed to be 11,000-years-old. The sculpture was found in the Levant and is believed to be from the Natufian people, a late Stone Age culture that is best known for collecting grains with seeds that stick to the stems, like wheat and rye, an important step in the development of farming.

Artist Marc Quinn, speaking to the BBC, says that the clever sculpture looks like a couple, a penis, breasts, testicles, or a vagina, depending on how it’s held, which could speak to an early understanding of reproduction and fertility in a culture that was making important discoveries about animal husbandry and agriculture.

“Whether we see the Ain Sakhri lovers as a piece of erotica, a tender expression of homosexual or heterosexual love, a symbol of fertility, masculinity or a metaphor for creation, depends on our own background and beliefs,” said British Museum curator Jill Cook.

“As we enjoy the ingenious composition and skillful artistry, we connect our present to its deep past and a period of significant transformation in human history. ”

The Warren Cup is a silver cup with two relief images that depict gay male sex, believed to be from 1st century A.D. Rome.

A vase depicting Sappho – the Greek poet from Lesbos known for her poems celebrating love between women – from 450 B.C. will also be part of the tour.

Simon Russell Beale, who co-narrated the audio tour, said that he was surprised that to many objects in the British Museum’s collection have queer connections.

“Many might even have seen some of them on display without knowing how they relate to queer history,” he told The Guardian. “I’m thrilled that, thanks to this new audio tour, these stories will now take pride of place. Same-sex desire has existed in all societies and it is really important that the British Museum is highlighting this.”

Is a serial killer to blame for multiple murders of trans women in Florida?