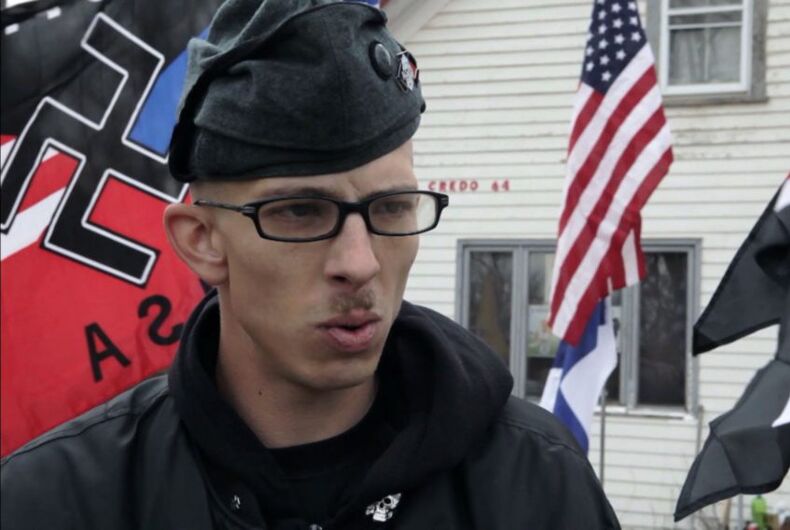 Neo-Nazi Kynan Dutton was arrested at the Knoxville, Tennessee, pride festival over the weekend after getting into a scuffle with another man. Dutton was at the event to “support the traditional family,” which apparently involves shoving people to the ground.

Dutton told the Knoxville News Sentinel that Pridefest should not be allowed because it is a historically “pro-white, pro-traditional family” town.

A strangely diverse group of extremists gathered to protest the event, from the neo-Confederate League of the South and other white nationalists to a handful of Black Hebrew Israelites. Dutton claims to be the leader of the Tennessee National Socialist Movement.

“[The] reason we’re here is to support the traditional family that is one man, one woman and children,” Dutton told the University of Tennessee Beacon before his protest. “None of these other permutations, some of this other corruption or evil that is being permutated by this parade –– it should not, and hopefully in the future will not, be allowed by these cities.”

Dutton was arrested after pushing a counter-protester to the ground in a brief scuffle. He was last arrested in a small North Dakota town where white nationalists were trying to set up an all-white racist enclave by buying up property and running for office.

He moved with his family to Leith, North Dakota, and was arrested after joining the movement’s leader, Craig Cobb, in parading around town with rifles and shouting at the town’s residents. The two men accused locals of vandalizing Cobb’s home.