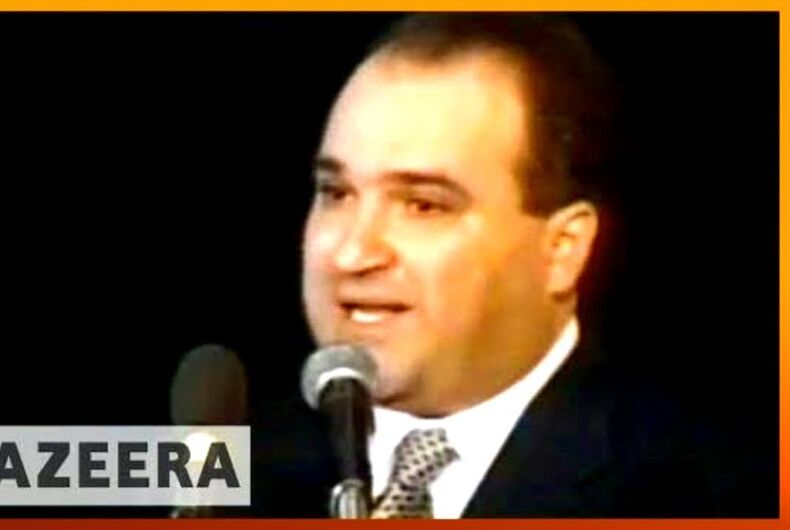 Despite President Trump’s rants to the contrary, there’s plenty of evidence to point to collusion between his campaign and foreign governments. And it wouldn’t be a Trump scandal if there wasn’t the confluence of sex and money.

That’s where George Nader comes in.

Nader is a Lebanese-American businessman who is frequently described as “a man of mystery” in press accounts. He is currently cooperating with Special Prosecutor Robert Mueller’s probe into the Trump campaign, having been served with warrants and a subpoena by FBI agents last January at Dulles Airport in Washington.

In a particularly nice touch, Nader was on his way to Trump’s Mar-a-Lago estate at the time.

Nader has long worked as an emissary for the United Arab Emirates, popping up as a Middle East expert in various forums. He apparently had a hand in the UAE’s success in having the Trump administration take steps against neighboring Qatar, an enemy of UAE, something Nader tried to cash in on, according to the Associated Press.

Nader’s work includes representing the crown prince at a peculiar meeting in the Seychelles in January 2017. The meeting brought together Nader; Erik Prince, the founder of Blackwater security firm and brother of Education Secretary Betsy DeVos; and Kirill Dmitriev, a Russian investor with close ties to Vladimir Putin.

At issue is whether Prince, an informal advisor to Trump, was representing the Trump transition team during the meeting and whether the goal of the meeting was to funnel money to help Trump’s political efforts. Such a goal would be illegal.

That Nader could get within a thousand miles of a presidential transition team could only happen in the Trump era. The reason: Nader has a predilection for underage boys that has gotten him into legal trouble and landed him in jail.

Nader was arrested in 1985 for possession of child pornography–specifically magazines and films featuring nude boys. Those charges were dismissed on the grounds that the search was illegal. But in 1991, Nader was convicted on a felony charge of transporting sexually explicit materials in foreign commerce and was sentenced to six months in jail.

Apparently, Nader learned nothing from his legal problems.

In the late 1990s and early 2000s, Nader was apparently hanging around the Czech Republic with an eye for underage boys. This time he didn’t get off quite so lightly. He was convicted of 10 cases of sexually abusing minors and sentenced to a year in prison.

He was subsequently expelled from the country.

In one episode, Nader asked a 14-year-old boy for oral sex in Nader’s hotel room. The boy refused, so Nader masturbated in front of the boy and then gave him the equivalent of about $100, according to the Associated Press.

The same report says that his conviction cited examples of Nader giving boys money, jewelry, cell phones, and clothes in return for sex.

Not only did the convictions not disqualify Nader from connecting with Trump’s transition team, it didn’t stop him from having his picture taken with Trump himself.

Nader turned to fellow swamp creature Elliot Broidy, a Republican fundraiser best known for being a client of Trump fixer Michael Cohen, (Cohen funnelled an inexplicably large payment to a Playboy model who Broidy says he had an affair with.)

In a normal administration, staff would prevent the president from posing next to a convicted pedophile. But any qualms were easily dispensed with when Nader coughed up a $189,000 donation to the Republican National Committee.

Nader got his picture.

Pride in Pictures 1978: Dykes on Bikes take charge of the parade