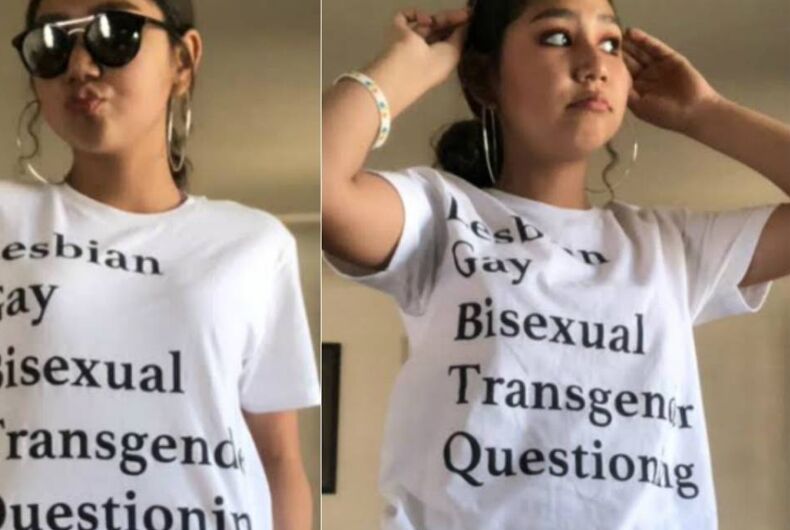 A California student says she was told to cover up her LGBTQ T-shirt at school.

Eighth-grader Andria Zavala at Clark Intermediate School in Clovis, California, said that she was sent to the principal’s office when a guidance counselor saw her wearing a white T-shirt that said “Lesbian Gay Bisexual Transgender Questioning” on it.

She said that she approached Principal Teresa Barber about the T-shirt and was told that it was “a distraction to other people and their beliefs.” She was told to button her over-shirt up so that no one could see the message.

The school district bans “extreme fashion that draws undue attention to the student” and clothing deemed “distracting.” It does not have a specific stance against T-shirts with writing on them.

Andria said that other students are allowed to wear clothes with logos and beliefs written on them.

“I also think (the shirt) stands for pride, pride in being unapologetically yourself and not having to apologize for your sexual orientation,” she told the Fresno Bee.

A spokesperson for the school district said that the principal did talk to Andria, but that she just asked Andria if she thought the T-shirt was a distraction and that the student buttoned up her other shirt on her own.

“She posed the question to the student to let the student decide what her purpose was in wearing the shirt,” the spokesperson said.

Even if that’s how it happened, maybe the principal should be supporting LGBTQ students instead of hinting that supportive students should be quiet?

This isn’t the first time Andria has gotten involved in student activism. Two months ago, she participated in a nationwide school walk-out protesting gun violence.

The T-shirt is sold by Hot Topic.

HIV’s viral ‘cousin’ is infecting people worldwide. So why is no one researching it?