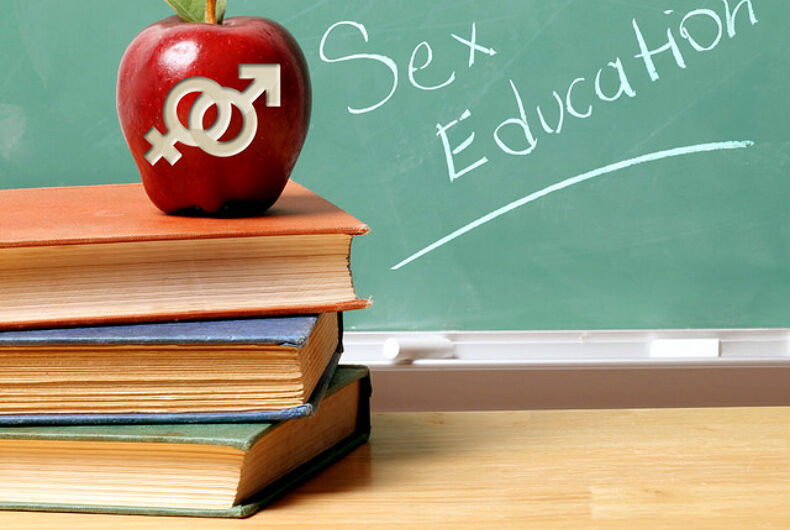 Nothing flips out conservative Christians more than sex–gay sex, lesbian sex, extramarital sex. Worst of all is the sexual lives of their own children, who are supposed to remain abstinent until marriage So it’s no surprise that the right is on a tear again about sex ed in multiple locations around the country.

Supporting the effort, Mary McAlister, an attorney for the Liberty Counsel, called sex ed in public schools “satanic” during a radio interview. Liberty Counsel has a long history of repeating the most vicious lies about LGBTQ people that it can cook up.

Some school districts have pushed back on the efforts to have parents absent their kids from sex ed classes. The school district for Orange County, California, told parents that there was no opt-out option for the state’s new sex ed curriculum. Conservative Christians are in a furor over the classes, which they insist promote homosexuality and are linked to liberal bogeyman George Soros to boot.

Of course, it’s an ill wind that doesn’t blow someone some cash. Tony Perkins, head of the Family Research Council (FRC), knows a good thing when he sees it. Perkins, who has been happy to grant President Trump cover for his reported sexual shenanigans, is circulating a fundraising letter using the threat of sex ed.

In the letter, Perkins says that FRC “is dedicated to ensuring our nation becomes a place where public school children are not exposed to pro-LGBT curriculum that encourages kids to ignore biology, use gender inclusive language, and even attend events with same-sex dates.”

What will it take to combat this horror? “Our goal is to raise $5.0 million before June 30, which funds our ongoing vision of a culture where all human life is valued, families flourish, and religious liberty thrives.”

In other words, the money goes to operating expenses.