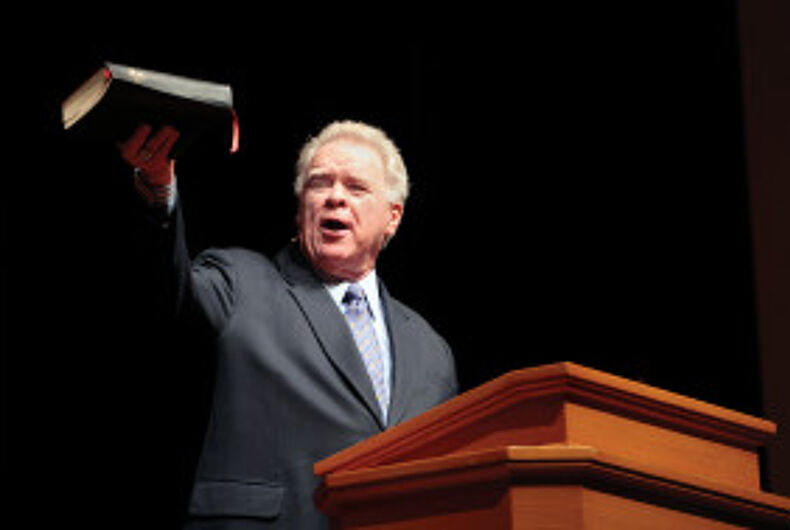 Paige Patterson is one of those people you’ve probably never heard of who has had an outsized influence on American politics.

As a leader of the Southern Baptist Convention, Patterson was a major player in the Conservative Resurgence, the movement that systematically eliminated liberal and moderate voices within the denomination and turned it into a hotbed of homophobia.

In the process, Patterson and his allies made being Christian mean not only being conservative but being Republican. (Patterson actually served as counsel on Ted Cruz’s presidential campaign.)

But it’s not Patterson’s hardline homophobia that’s causing him problems these days. It’s his defense of domestic abuse.

In a recording of a 2000 event that recently emerged, Patterson, head of the Southwestern Baptist Theological Seminary, recalls how he counseled a woman whose husband beat her to “be submissive in every way you can.”

The woman returned later with two black eyes. “She said: ‘I hope you’re happy.’ And I said ‘Yes … I’m very happy.’” The reason for Patterson’s joy: her hsuband had shown up in church for the first time.

Patterson says now that God was using the wife to save her husband.

“I knew that God had changed this man’s heart,” Patterson said in a statement after the recording was released. “What he had done to his wife had brought conviction to his heart. I was happy—not that she had suffered from his anger, but that God had used her to move her husband to conviction of his sin.”

Patterson’s attitude is hardly surprising. Throughout his career he has advocated for women to assume submissive roles. His seminary won’t allow women to teach men and offers homemaking courses for its female students.

But his comments have opened up a split within the denomination. More than 2,000 Baptist women have signed an open letter critical of Patterson but stopping short of calling for his resignation.

“The Southern Baptist Convention cannot allow the biblical view of leadership to be misused in such a way that a leader with an unbiblical view of authority, womanhood, and sexuality be allowed to continue in leadership,” the letter says.

Unsurprisingly, other comments from Patterson are emerging that are equally reprehensible. In a 2014 sermon, Patterson related an anecdote about how he was talking with a woman while her son and friend were nearby.

A “very attractive young co-ed” who was “not more than about 16, but let me just say, she was nice” walked by, Patterson said. The woman’s son ogled her and said, “Man, is she built.”

When his mother scolded him, Patterson took the son’s side.

“Leave that boy alone, he’s just been biblical,” Patterson said, justifying lust against an underage girl. “That’s what it says right here. God built her and brought her to Adam.”

Under normal circumstances, the comments would lead to Patterson stepping aside. But Patterson is such a revered figure within the Southern Baptist world that, while some people have condemned his comments, most leaders have kept their mouths shut.

Even if Patterson is forced out, he leaves a legacy of homophobia that few can top. He has made opposition to LGBTQ equality a hallmark of the Conservative Resurgence.

Patterson was a major force in the denomination’s opposition to same-sex marriage. He led the effort to split from the Baptist World Alliance because two churches under its umbrella supported marriage equality. He forced the sale of a building because the church it housed welcomed LGBTQ congregants.

In the words of one his supporters, “The reason why we’re not debating among ourselves over whether or not homosexual acts are sin and whether or not biological men and women can self-identify their gender is because of the unwavering perseverance of Paige Patterson, and men and women like him.”

Or put another way, Paige Patterson has helped make your life miserable for decades.

Will New York’s next Attorney General be a gay black man?