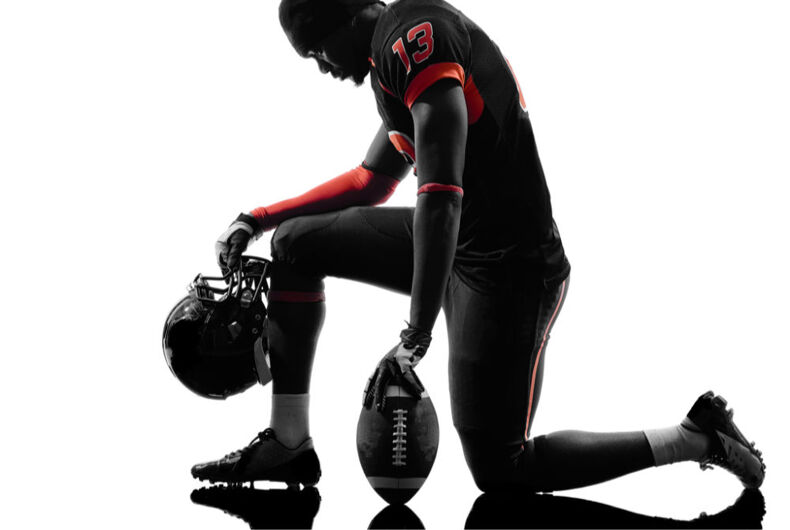 The terms of the policy include the requirement that players stand when on the field during the performance of the anthem, though they have the option of remaining in the locker room.

The owners should be ruled “off sides” by agreeing to any policy without input and expressed consent from the NFL Players’ Union.

It comes in the context of declining ticket sales and anger by some fans around the swirling controversy, flamed by Donald Trump to a “white”-hot intensity, over Colin Kaepernick’s decision to take a knee during the National Anthem to highlight deadly police actions taken against unarmed black men.

“Wouldn’t you love to see one of these NFL owners, when somebody disrespects our flag, to say, ‘Get that son of a bitch off the field right now, out, he’s fired. HE’S FIRED!’” shouted Trump last year to the loud applause of his rally audience.

“You know, some owner is gonna do that… [These owners are] friends of mine, many of them… They’ll be the most popular person in the country.”

Donald Trump’s attacks on primarily black NFL players like Colin Kaepernick and several others for asserting their First Amendment rights clearly indicates that he does not understand Constitutional guarantees of freedom of speech, expression, and association.

The 50 stars and 13 strips on our flag of red, white, and blue represent a collective image of the United States of America.

While the United States symbolizes a beautiful notion founded on a noble concept and an enduring vision, it remains a work in process. It is progressing but not yet reaching that concept.

A true patriot is a person who, indeed, loves one’s country, but also one who sees the way things are, and one who attempts to make change for the better. A patriot also views other countries with respect and admiration, as valued members of an interconnected world community.

By refusing to stand, place one’s hand over one’s heart, remove hats, and sing as the national anthem is performed, people are raising important questions concerning what it means to be patriotic and an active participant in our democratic process.

During the Vietnam War era, those who challenged the war were met with signs and bumper stickers demanding: “America, love it or leave it.” The response to this was “American, change it or lose it.”

A patriot sees things the way they are and tries to make them better. Fascist dictatorial regimes demand mindless uncritical allegiance and mandate dire consequences for dissenters.

It is arrogant at best for members of dominant groups and those in power to believe they have the right to dictate conditions by which people protest their concerns. Looking back on our history, how well did that work for British King George III?

NFL fans should have far greater interest in the short- and long-term affects of players who perennially take severe blows to the head than by players who occasionally take a knee to the ground. Forced expressions of nationalism go against what the flag symbolizes and what our brave service members risk their lives to protect.

How many people who vehemently advocate for the standing of the Star Spangled Banner or affix flags to porches and and pickup trucks take the time to vote?

How many of them volunteer to remove litter from parks or serve meals at soup kitchens? How many stay current on issues, laws, and policies affecting their communities and their nation?

And how many of them truly understand the histories, the peoples, the governmental and economic systems, the traditions, the languages – for that matter, the actual locations – of many other countries across the planet in contexts other than having to learn about these nations when international tensions arise?

Pride in Pictures 1977-78: Anita’s wave of hate created our strength in numbers