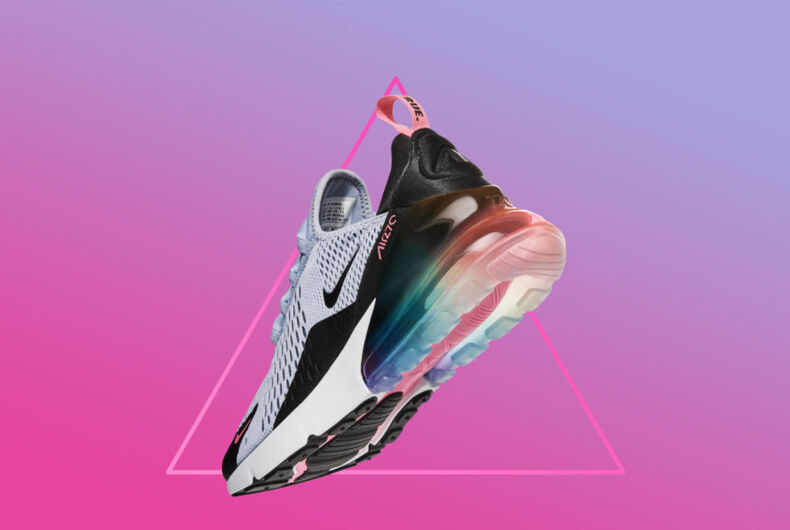 The Nike BETRUE Air Max 270 will be the most limited release of of the silhouette’s short but popular history.Photo: Nike

Nike’s annual BETRUE collection of sneakers has become a tradition at this point and the shoe manufacturer has released their 2018 series just in time for pride month.

This year, the company says they decided to focus on the “colors and symbols that have been reclaimed and historically repurposed by the LGBTQ community.”

While rainbows still make an appearance, the shoes focus on pink and lavender themes as a nod to gay liberation before Gilbert Baker created the now iconic rainbow flag.

“Lavender, a dynamic blending of gender-linked light blue and light pink, is one of the oldest symbolic references in LGBTQ culture,” the company said in their announcement.

“The color’s historical connotations preceded the rainbow symbol’s widespread popularity in the 1970s, appearing on garments as a kind of quiet language among the community. Hints of lavender are detailed across all four of the silhouettes.”

Nike acknowledges that the pink triangle has “a complex past in LGBTQ culture,” but defends their use of a symbol of gay persecution, Nazis, and death on their sneakers.

“Originally used to identify LGBTQ individuals during WWII, the triangle was reclaimed in the 1970s by pro-gay activists and was later adopted by the AIDS Coalition to Unleash Power (ACT UP) in their memorable 1980s-era “Silence=Death” campaign,” they say.

What they omit is that it was worn by concentration camp inmates who were put to death for the “crime” of being gay. The gay community’s adoption of the symbol wasn’t for commercial reasons, it was to acknowledge our shared history of discrimination and violence.

Is it tasteless or a nod to history? It’s a little bit of both.

But in the spirit of pride and goodwill, let’s let it go and celebrate the worldwide rainbow we’ve become.