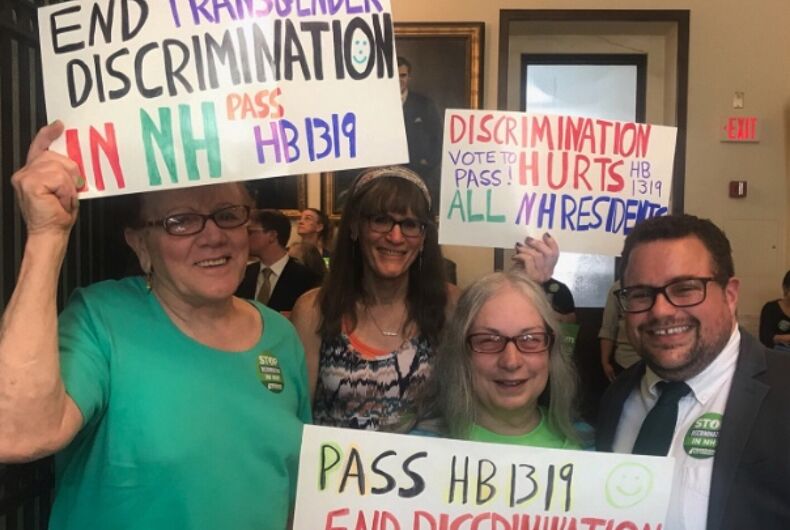 On Wednesday night, the state’s senate voted 14-10 on legislation that updated state law prohibiting discrimination in employment, housing and public spaces specifically to include transgender residents.

Republican Gov. Chris Sununu has signaled he will sign it, making New Hampshire the 19th state to outlaw discrimination against transgender people.

The news has the LGBTQ community celebrating not just in the Granite State, but nationwide.

“No person should be fired, evicted or denied service just because of who they are, and it is far beyond time that New Hampshire’s nondiscrimination protections include transgender people,” said Marty Rouse, national field director for the Human Rights Campaign.

“Fair-minded people across the Granite State support these protections and recognize the importance of making New Hampshire an inclusive and welcoming state for all. Inclusive nondiscrimination protections are now one step closer to becoming law, and we urge Gov. Sununu to continue this momentum by signing HB 1319.”

The Williams Institute, a UCLA think tank that researches LGBTQ law and policy, tweeted congratulations to the 4,950 transgender adults and teens in New Hampshire.

4,950 transgender adults and teens in New Hampshire will now have statewide protection against discrimination. https://t.co/hTQIAcO2sT

The tide for such protections is turning nationwide notes the organization Freedom for All Americans, a bipartisan campaign fighting for LGBTQ nondiscrimination protections.

“Earlier this month, voters from all walks of life upheld transgender equality in a historic vote at the ballot in Anchorage, Alaska. I’m now overjoyed to see the conservative New Hampshire legislature pass a comprehensive nondiscrimination law that will make it that much easier for transgender Granite Staters to live their lives without fear.”

Davis said Freedom for All Americans was proud to have played a leadership role in both of these campaigns.

“We continue our work to secure full nondiscrimination protections for LGBTQ people nationwide. Our shared triumph in New Hampshire is yet another example that equality is not a partisan issue, but a human issue — and one that resonates deeply with the core values of Americans from all walks of life.”

The Union Leader newspaper, in Manchester, reports that a gay state senator shared his personal experience during the debate. State Sen. Dan Innis, of New Castle, said the legislation was long past due.

“I am supported by the anti-discrimination passed into law years ago,” Innis said. “Am I better than the transgender people here? No, I am not, absolutely not. So let’s give them the same protections I enjoy.”

The campaign manager of Freedom New Hampshire, Linds Jakows, congratulated fellow transgender residents and thanked them for sharing their stories.

“This law will go a long way to affirm the dignity of transgender people and allow them to truly live free,” Jakows said to the Union Leader.