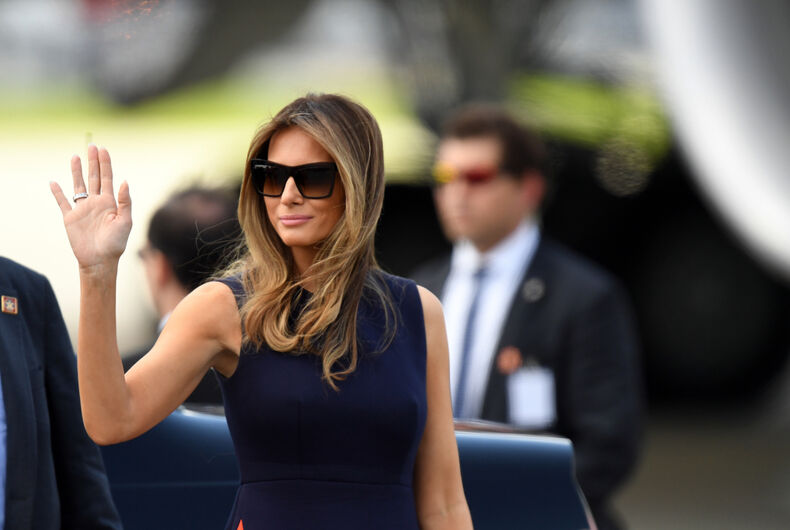 First Lady Melania Trump’s anti-bullying campaign should put its focus where help is needed most: on LGBTQ youth.

Earlier this month, the First Lady launched her “Be Best” anti-bullying campaign, which will focus on childhood well-being, social media use and opioid abuse.

“As a mother and as first lady, it concerns me that in today’s fast-paced and ever-connected world, children can be less prepared to express or manage their emotions and oftentimes turn to forms of destructive or addictive behavior such as bullying, drug addiction or even suicide,” Mrs. Trump said.

While Mrs. Trump did not specifically mention LGBTQ youth during her remarks, statistics show that LGBTQ youth are far more likely to be bullied than their peers, and at a more significant cost to their physical and mental health.

According to the Human Rights Campaign report, “Growing Up LGBT in America,” 26 percent of LGBT youth say their most significant problems are lack of acceptance at home and bullying at school. LGBTQ youth are twice as likely as their peers to have been physically assaulted, kicked or shoved at school.

A study published in the Journal of the American Medical Association in December showed that LGBTQ youth are more vulnerable to planning or attempting suicide. Researchers found that 40 percent of sexual minority high school students were seriously considering suicide; 34.9 percent were planning suicide, and 24.9 percent attempted suicide in the previous year.

Meanwhile, the Trump administration is helping the bullies. The administration’s decision to rescind federal guidelines protecting transgender students in public schools puts those students at greater risk of bullying and its consequences.

While the First Lady is voicing concern for youth, the Trump administration is imperiling LGBTQ youth.

The Department of Justice recently announced that it would no longer collect crime data on LGBTQ youth at the federal level. LGBTQ youth could disappear from crime statistics as a result, which community leaders rely on in determining how to prevent bullying and harassment.

Mrs. Trump has acknowledged critics of her anti-bullying campaign, without addressing the content of their criticism. It’s hard to take on bullies when you’re married to one of the most prominent and most influential bullies in the country, because the person who most needs to hear your message isn’t listening.

Stopping bullying, after all, starts at home.

These tips for ‘ex-gay happiness’ are completely unhinged

Is ‘Girls’ a bisexual anthem… or biphobic?