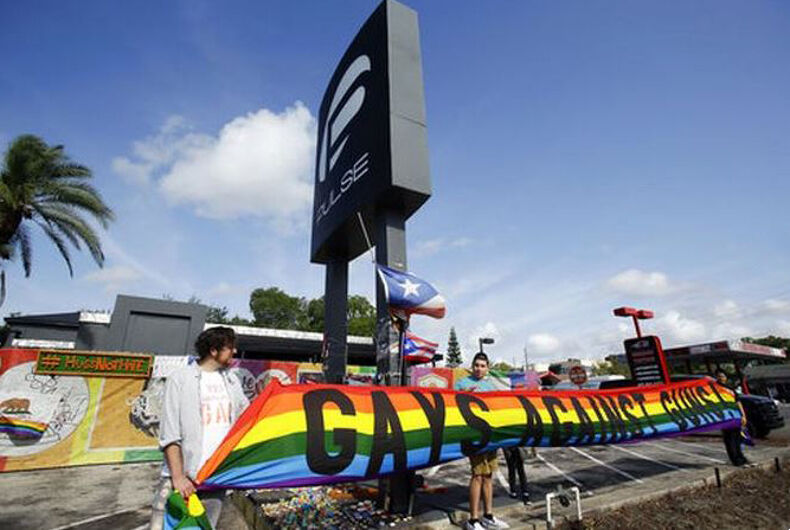 Activists hold a banner in front of the Pulse nightclub site after a news conference, Thursday, May 4, 2017, in Orlando, Florida. Photo: AP Photo/John Raoux

Activists plan to remember those who died in the Pulse nightclub shooting with a mass die-in on the National Mall in Washington, DC. Survivors of the Parkland school shooting are helping to spread the word.

A total of 49 people died at Pulse, in addition to the gunman, who was killed by law enforcement.

Orlando resident Amanda Fugleberg will go to Washington to help lead the National Die-In, which is.scheduled for June 12, the second anniversary of the Pulse shooting which tapped just 15 minutes from her home. Organizers will focus on demanding stronger screening for gun ownership.

”It was the first news I saw when I woke up that day, and I remember the death toll just rising, ” she said. “It brought me to tears to know something like that happened so close.”

Fugleberg and Frank Kravchuk began planning and pulling together proper permitting a week and a half ago. Fugleberg also reached out to Parkland survivor David Hogg, who just led a successful die-in campaign against the Publix grocery store chain for its support of a National Rifle Association-backed candidate. She said Hogg expressed strong support for the idea.

Organizers would like to see as many as 100,000 participate in June 12 die-in. The event will last 12 minutes — 700 seconds to represent the 700 victims who’ve died in mass shootings since the Pulse massacre. A Twitter account has been set up for the event, along with a Facebook page, an events page, and a GoFundMe page.

The question now is: can they pull it off?

Neither of the co-founders were directly affected by the Pulse shooting, nor do they know anyone who was. So they lack the impact of personal connection. Plus, it’s been two years since the Pulse shooting, which is more than enough time for it to have faded from the general public’s memory.

Besides the lack of immediacy, organizers are up against a very right deadline to pull together such a huge national event.

Reaching out to Parkland survivors is a smart move. Joining forces lends the organizers some of the immediacy and urgency they lack on their own. Plus, the national recognition and seemingly innate media savvy of the Parkland activists can only help raise the profile of and spread the word about the National Die-In.

The timing of the event may also help the organizers to tie it in with Pride events, if they reach out to Capitol Pride and the DC LGBTQ community.

With a little luck, a lot of legwork, and the right partnerships, the National Die-In might be the success that a long overdue reaction to the Pulse shooting deserves to be.

Editor’s note: This story has been corrected to include Amanda Fugleberg’s proper name and that Brandon Wolf is a Pulse survivor and not a Parkland survivor. We regret the mistake.