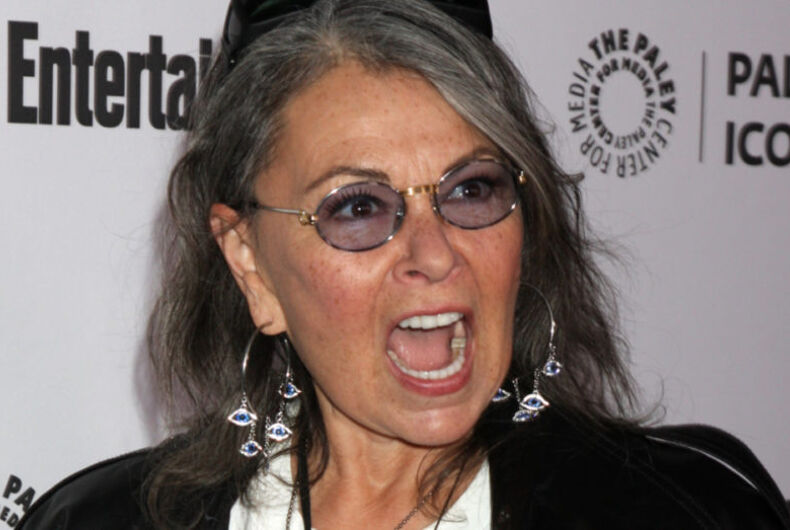 Following a racist and antisemitic rant last night on Twitter, Roseanne Barr is paying the price Donald Trump hasn’t. Barr’s rebooted sitcom, Roseanne, has been canceled despite being one of ABC’s top programs.

“Roseanne’s Twitter statement is abhorrent, repugnant and inconsistent with our values, and we have decided to cancel her show,” ABC Entertainment president Channing Dungey said in an emailed statement.

Barr described former Obama advisor Valarie Jarrett with a racial slur, tweeting “[M]uslim brotherhood & planet of the apes had a baby=vj” in response to a fan who mentioned Jarrett to her.

Jarrett is African-American and was born in Iran while her father, who was a doctor, was running a hospital for children there. She is not Muslim and both of her parents were born in the U.S.

Because Jarrett speaks Persian, is an African American woman, and held a prestigious position in the Obama Administration, she has been the subject of conspiracy theories for years.

The Trump-supporting comedian also attacked Chelsea Clinton by falsely claiming she was married to one of George Soros’ nephews and called Hillary Clinton “a colostomy jug cuz full of shite.”

After public blowback, Barr claimed she was leaving Twitter, and apologized to Jarrett. She also apologized to Chelsea Clinton after being corrected about her husband, but did it in a typical-deplorable way.

Good morning Roseanne – my given middle name is Victoria. I imagine George Soros’s nephews are lovely people. I’m just not married to one. I am grateful for the important work @OpenSociety does in the world. Have a great day! https://t.co/mXokiTEwN7