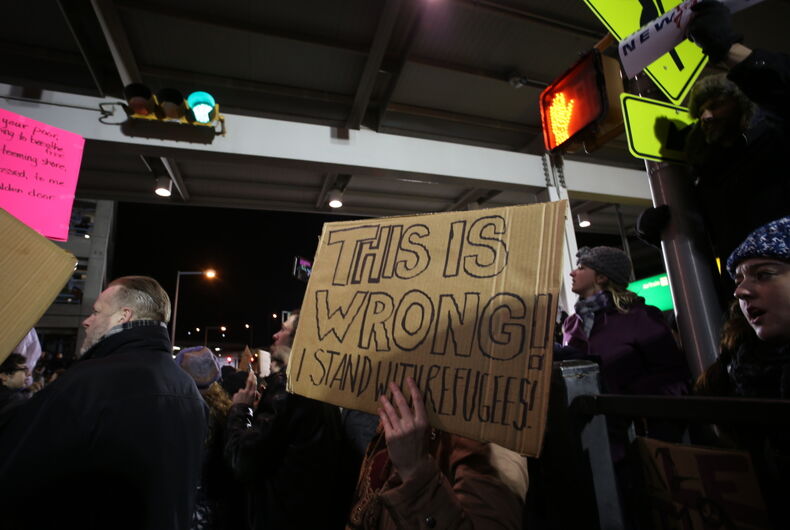 Under the influence of the Trump administration’s anti-immigrant fervor, ICE agents are tearing apart LGBTQ families too.

Nunez Martinez, 37, was taken into custody during a mandatory marriage interview on January 31 at immigration offices in Philadelphia. Martinez and his US-citizen husband Paul Frame were visiting the U.S. Citizenship and Immigration Services to petition for him to gain legal status when Immigration and Customs Enforcement (ICE) officers arrested him on a previous order of removal.

Lawyers for Martinez have said his detention is unlawful. “There’s simply no justification for why his detention is necessary. It’s only harming him and his husband,” said Golnaz Fakhimi of the ACLU of Pennsylvania.

Detention is taking a toll. Martinez has lost weight and sleep, and fears for his safety in ICE custody. Meanwhile, Frame worries about his husband’s physical safety and mental well-being.

Frame spoke tearfully about visiting his husband twice a week at the York County Prison in Pennsylvania. “Some days are good. Some days are not good,” Frame said at a news conference.

The ACLU says that Martinez is fleeing persecution in his native Mexico, which he left in 2001 after he received threats against his life and the murder of a gay friend of his.

Martinez has lived peacefully in this country for 17 years, working and paying taxes. In 2014, he met Frame, and they married in 2016. Frame began the process of trying to sponsor Martinez to become a permanent resident, leading to the meeting where his husband was seized.

ICE has not explained by Martinez needs to be detained while awaiting his immigration court proceedings. Supporters say he is no threat to the community, and he is unlikely to flee as his husband lives in the area.

The ACLU joined immigrants and members of the LGBTQ community to announce the filing of a federal complaint and to begin a “Call to Action” for Martinez. They are asking the public to phone the Philadelphia offices of ICE and demand Martinez’s released.

Someone threw water at Tomi Lahren & Twitter’s reactions were hilarious