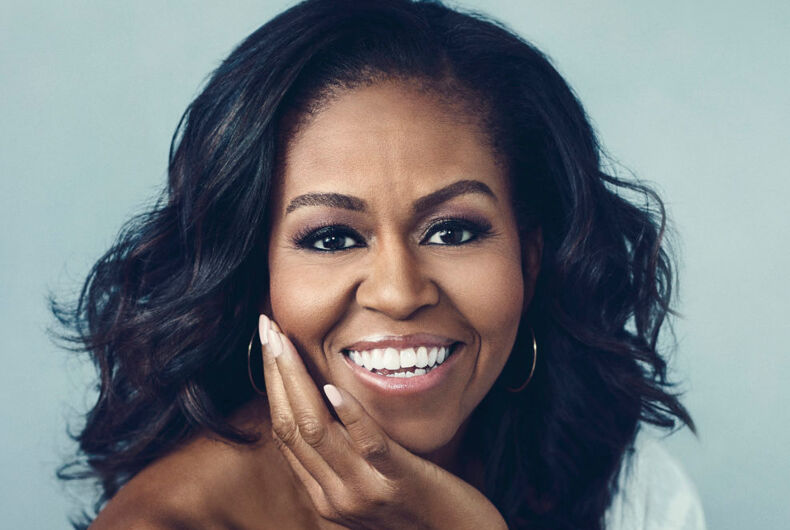 We haven’t even seen the book yet, but the just-released cover of Michelle Obama’s upcoming book already has people waxing nostalgic for her days in the White House.

Publisher Penguin Random House, is hyping the book, Becoming, as a “work of deep reflection and mesmerizing storytelling.”

“With unerring honesty and lively wit, she describes her triumphs and disappointments, both public and private, telling her story as she lived it–in her own terms and in her own words,” according to a press release.

The book will be released just after the mid-term elections, on November 13. But already people on both sides are revved up about it. (Six months out, the book is in the top 400 best-sellers on Amazon.)

It will be interesing to see if Obama includes more details about her husband’s “evolution” on marriage equality. According to Forcing the Spring, a chronicle of the fight for marriage equality, President Obama was reluctant to support marriage equality publicly until Vice President Joe Biden blurted out his support for it.

Even then President Obama was conflicted about the potential political cost. Michelle on the other hand was not. As he prepared to give the interview in which he shifted positions, Michelle told her husband, “Enjoy this day. You are free.”

Michelle regularly signalled her support for LGBTQ rights, inviting Jason Collins, the first openly gay professional basketball player, to be her guest at the 2014 State of the Union address

Needless to say the Twitterverse is exploding with anticipation.

"When they go low, we go high." We love you, @MichelleObama and we miss you. Congratulations on the upcoming memoir. #Becoming https://t.co/D5pO7c6TyE

okay so at quick glance, @MichelleObama kinda looks like she’s flipping someone off and honestly, i’d also buy her classy version of a burn book. #becoming pic.twitter.com/SSK0s13LAi

Of course, the book will bring out the haters as well. The news that the Obamas had inked a deal with Netflix earlier in the week was already driving right-wing types nuts.

Since @BarackObama and @MichelleObama have joined #NetFlix, I will now be getting a subscription because I am DEFINITELY watching their programs!!! ‘Barack and Michelle Obama’ 👏🏼👏🏼👏🏼🙌🏼🙌🏼🎉

And then there’s the thinly veiled racist attacks from Obamaphobes, including those who insist, like world-class nutburger Alex Jones, that Michelle Obama is a man.

Lmao off classic and almost as ugly as #MichelleObama :-) pic.twitter.com/kR15NfsjXX

Of course, Michelle may give Melania Trump a blueprint for her own memoirs, when the time comes. After all, she’s copied everything else Michelle has done.

Democrats introduce bill to prevent use of religious exemptions to discriminate