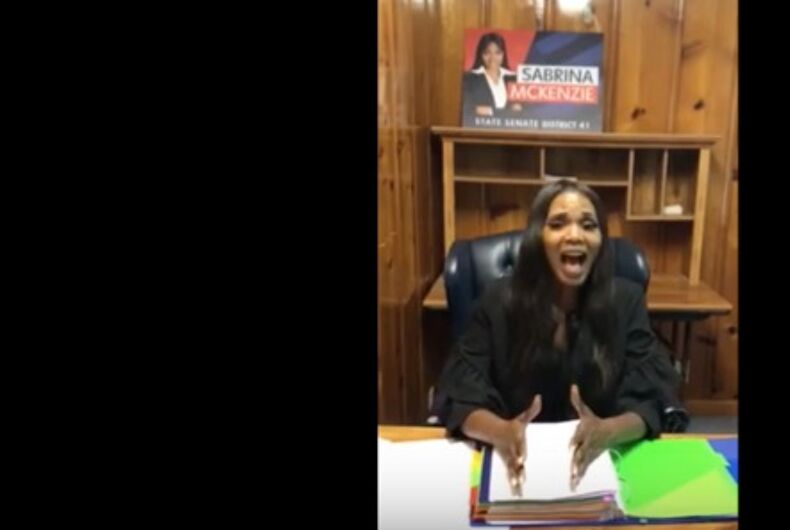 Sabrina McKenzie is urging people to “vote for a progressive Georgia,” but how progressive is she on LGBTQ rights?

McKenzie, a self-described “dancing preacher” and Democratic candidate for the Georgia state senate, says she “loves homosexuals” but has a long history of opposing same-sex marriage and LGBTQ equality.

In the posts, McKenzie ⏤ who claims she “loves homosexuals,” and had a gay brother ⏤ expresses her support for a “religious freedom” bill that Governor Nathan Deal vetoed in 2016.

In a YouTube video featuring images of male couples, McKenzie calls for a march on Washington, saying, “So here we stand today, where people are trying to have morality apart from God.”

In one series of tweets in 2016, McKenzie refers to a gay character on a popular Fox drama, “On Empire I noticed the men were either gay or in prison. Question: Is that what America has become or a depiction of where we’re going?”

On Empire I noticed the men were either gay or in prison. Question: Is that what America has become or a depiction of where we are going?

Christian Pastor In Vermont Sentenced To One Year In Prison After Refusing To Marry Gay Couple. Read Article http://t.co/Ji3AYFAlLt

#WatchmenAlert Transgender Woman Is Charged With Voyeurism at Target in Idaho.

#WatchmenAlert Transgender Troops Ban has been lifted in the military. https://t.co/QeNc4sOwV0

Ban on transgender troops to be lifted July 1 https://t.co/d7lPlU2j0l via @USATODAY

In early 2016, McKenzie supported a sweeping anti-LGBTQ bill, claiming it would keep pastors from being “forced” to marry same-sex couples. She appeared at the Capitol in support of the law, which passed the legislature but was later vetoed by Deal.

In another series of tweets that year, McKenzie warned her followers that they would see “satanists enter into the school system” with “a heavy infiltration of same-sex promotion.”

In 2012, McKenzie urged her followers to sign a position against legalizing same-sex marriage.

The President of the United States: The government should not sanction gay marriage. https://t.co/VVKieykf via @change

Marriage is a covenant instituted by God therefore gay marriage is an issue of the church, that will be Silent no more.

Sign the petition Against Gay Marriage as a law. https://t.co/TqzxHKkf

Read here why people are signing the petition against gay marriage. https://t.co/TqzxHKkf

President Barak Obama: The government should not sanction gay marriage. https://t.co/HPONsgr2 via @change

In response to the questions about her social media posts, McKenzie said she does not plan any more religious exemption bills, and would focus on passing an Equal Rights Amendment, which would prohibit discrimination based on sex.

Instead of saying whether she still opposes marriage equality, McKenzie shared a video in which she says, “I love homosexuals,” and speaks of her close relationship with her late brother.

McKenzie can receive the benefit of the doubt that she loved her brother. How far that “love” extends to the rest of us is questionable at best. McKenzie’s words say one thing, but her long history of action demonstrates quite another.