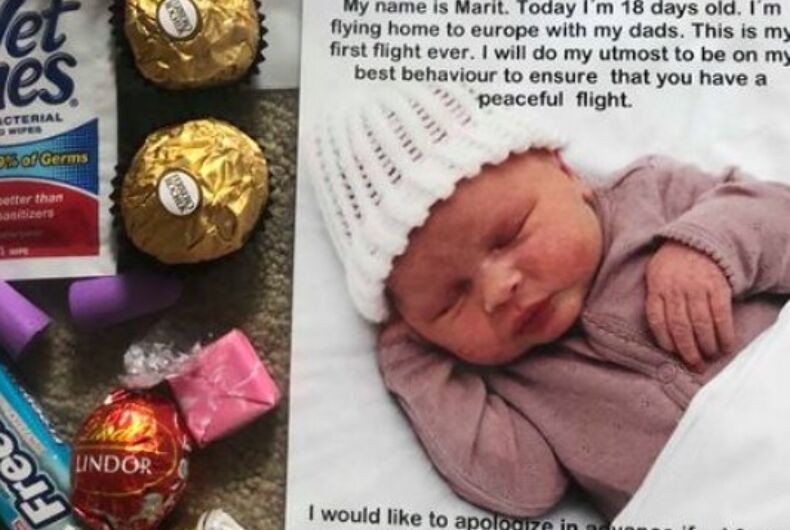 Niall Horan of the boy band One Direction tweeted about an adorable surprise he had on a transatlantic flight.

He found a “goodie bag” and a note from two dads on his seat, which said that they were on the flight with their 18-day-old baby.

My name is Marit. Today I’m 18 days old. I’m flying home to europe with my dads. This is my first flight ever. I will do my utmost to be on my best behaviour to ensure that you have a peaceful flight.

I would like to apologize in advance if – I for any reason loose my cool, my temper, my ears hurt or my tummy gets fussy. I think my dads are more nervous than I am, so they made you this goodiebag.

Have a great flight.

Had the coolest little goodie bag on the plane with this letter enclosed . Marit was quiet as a mouse for 10 hours . Goodluck to both dads pic.twitter.com/Efd0eJEVVj

“Marit was quiet as a mouse for 10 hours,” Horan tweeted.

The guys made these for all the people sitting in the vicinity , class act

People responded on Twitter asking the most pertinent question: what was in the bag? Someone else had a picture.

Lindt chocolates and rochers? Not a bad goodie bag.

Texas Democrats choose lesbian to be their candidate for governor

Are Democrats about to throw away the midterm elections?