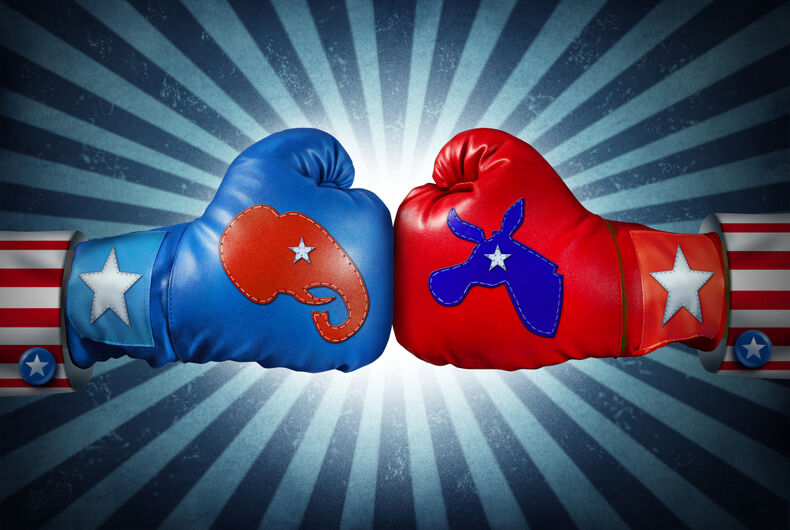 Are Democrats poised to snatch defeat from the jaws of victory in midterm elections?

It seemed like such a sure thing. Democrats couldn’t have asked for a better target than the Trump administration for midterm elections, not to mention a Republican party with neither the will nor the desire to confront glaring corruption in the Trump White House.

Undoubtedly, Democrats would be favored to make considerable gains in midterm elections, with Donald Trump’s dumpster fire of an administration to run against.

But never underestimate the Democrats’ ability to screw up a sure thing.

Not anymore. A new Reuters poll shows that Republicans now have a slim lead over Democrats in a generic ballot among registered voters, for the first time this year.

The poll showed that 38.1 percent of registered voters would vote for a Republican if midterms were held today. Just under 37 percent said they would vote for a Democrat. Another 15.4 percent were undecided.

So, what happened? The Democrats’ lead has been shrinking for a while, and Republicans have managed to close the gap in the last few months.

Granted, Republicans’ 1.4 percent advantage isn’t insurmountable, and a lot could happen between now and November to change it for better or worse.

Still, how have Democrats managed to squander their lead?

One possibility is that Democrats have relied too much on hopes that the Trump administration would anger voters enough to swing at least one House of Congress back to their party’s control.

A couple of things may have backfired with that strategy.

First, Trump and his administration have proven very skilled in the art of distraction, using scandals and outrage to draw public and media attention away from the disastrous policy changes taking place.

Barely a week goes by without a presidential tweet or some salacious new revelation in one of the administration’s ongoing imbroglios capturing headlines and public attention.

Meanwhile, it doesn’t help that Democrats like Senators Joe Manchin of West Virginia and Joe Donnely of Indiana often vote with Republicans. As a result, Democrats can’t point to any significant accomplishments in this Congress.

Having no real victories to point to doesn’t help Democrats message. They can’t talk about their accomplishments, so they’re left with the strategy of decrying the “culture of corruption,” which voters have already heard so much about that they’re almost accustomed to it.

It’s not enough to hope that people will turn out at the polls if Democrats give them plenty to vote against. If Dems are going to get enough support from the progressive base and groups like millennial voters to win midterms, they need to give people something to vote for.

And they’re running out of time.

Why does the FBI refer to trans people as male or female ‘impersonators’?