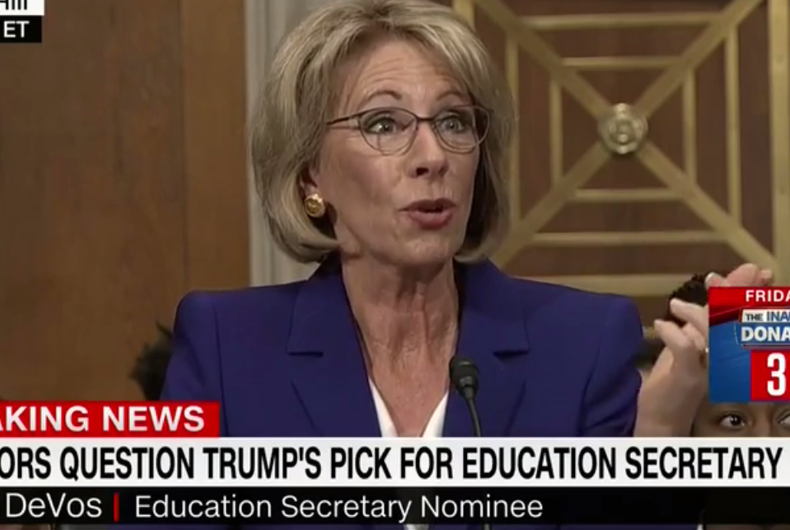 Pride month is around the corner, and two years into the Trump era several US agencies are still holding Pride celebrations. But some important guests are missing from the festivities.

Cabinet secretaries will be noticeably absent from some celebrations, and other celebrations are actually in question.

The absences of cabinet secretaries at Pride events stands in sharp contrast to the Obama administration, when the secretaries not only issued Pride proclamations but frequently spoke at department events.

Some agencies are holding events despite rolling back LGBTQ protections in those departments.

The Department of Defence is holding its Pride celebration on June 11, and it’s the first one since Trump instituted a transgender military ban. Despite court rulings blocking enforcement of the ban, defense secretary James Mattis has issued recommendations excluding transgender people from the armed forces with few exceptions.

Deputy Defense Secretary Patrick Shanahan said Mattis is unable to attend the DOD event due to a scheduling conflict. Invitations have gone out to the rest of Pentagon leadership.

The State Department planned its celebration before the Senate confirmed Mike Pompeo as Secretary of State. Deputy Secretary of State John Sullivan and Rep. Mark Takano (D-Calif.) are scheduled to speak instead.

During his confirmation hearing, Sen. Cory Booker grilled Pompeo — who once described homosexuality as a ”perversion” — on his anti-LGBTQ record as a member of the House.

Despite Pompeo’s anti-LGBTQ record, following his confirmation the State Department issued a positive statement for the International Day Against Homophobia.

The statement read in part, ”The United States firmly opposes criminalization, violence and serious acts of discrimination such as in housing, employment and government services, directed against LGBTI persons. … Human rights are universal, and LGBTI people are entitled to the same respect, freedoms, and protections as everyone else.”

The Department of Housing and Urban Development (HUD) is holding two events focused on the the legal landscape of LGBT access to housing and shelter. Secretary Ben Carson won’t be attending because he’s traveling that week.

If Carson were able to attend, it would be awkward. Just a few months ago, Carson expressed concerns about allowing transgender people access to homeless shelters consistent with their gender identity — the very topic the events are set up to discuss.

During a congressional hearing in March, Carson said the issue is “complex,” saying that women don’t want to share bathroom facilities with “somebody who had a very different anatomy.”

The Education Department is holding two events related to Pride. One discussion set for June 19 is titled “Highlighting Difference with Children.” Another in July is set to discuss Supreme Court cases related to LGBT issues.

Education Secretary Betsy DeVos was invited to attend, but an employee said there is ”not a chance” she will make an appearance. Her decision not to take up complaints from transgender kids whose schools have blocked their bathroom access would be in sharp contrast to the theme of the events.

So why are these openly anti-LGBTQ cabinet secretaries allowing these Pride celebrations in their departments while steering clear of any public association with the events?

It could be that they’re attempting to have it both ways.

Barring these celebrations might generate lousy press and alienate the general public. Even in the age of Trump, support for LGBTQ equality continues to rise. According to a new Gallup poll, 67% of Americans, and 44% of Republicans, support same-sex marriage — the highest level of support in more than 20 years.

On the other hand, appearing at Pride events and giving the impression of support for LGBTQ rights might anger and alienate the GOP’s evangelical base, and even threaten their positions.

These cabinet members are walking a fine line, but trying to show that they aren’t on our side of it.