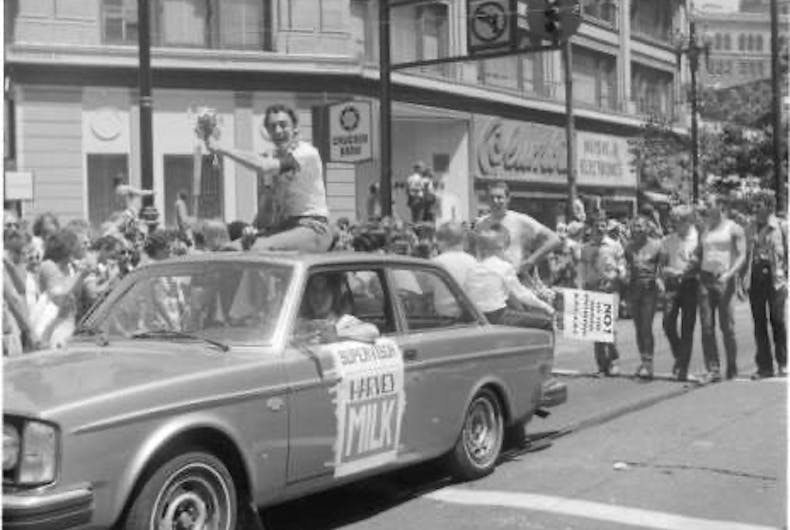 Harvey Milk rides atop a car in the 1978 San Francisco Pride parade. Milk, “the Mayor of Castro Street,” had been elected to the city’s board of supervisors in November 1977.Photo: Pat Rocco / ONE Archives Foundation

But, in 1978, it was far less common, let alone for a member of the San Francisco board of supervisors to march in both San Francisco and Los Angeles.

Harvey Milk had been elected to the post in 1977, after a chilly reception in local politics and three election losses. But the “Mayor of Castro Street” had organized his neighborhood, a refuge for the city’s surging gay and lesbian population.

His swearing-in made national headlines. He was the first non-incumbent openly gay man elected to public office, elected to a diverse board that also included a single mother, a Chinese-American man and an African-American woman.

His message was pragmatic: compromise and community, and he encouraged others to come out.

This made pride parades central to his message. Because this is where we saw the light of day, and the day saw us. But no one could have predicted the 1978 Pride celebrations would be his last. Milk and Mayor George Moscone would be assassinated by Milk’s rival, Dan White, that November.

In office for only 11 months, Milk worked on a variety of causes. He successfully pushed the city to pass a strong anti-discrimination ordinance, and he helped lead defeat of the Briggs Initiative, which demonized gays and lesbians in public education. He fiercely advocated for LGBTQ youth.

“All young people, regardless of sexual orientation or identity, deserve a safe and supportive environment in which to achieve their full potential,” Milk declared.

Even Trump’s most homophobic cabinet secretaries are allowing Pride events. Why?