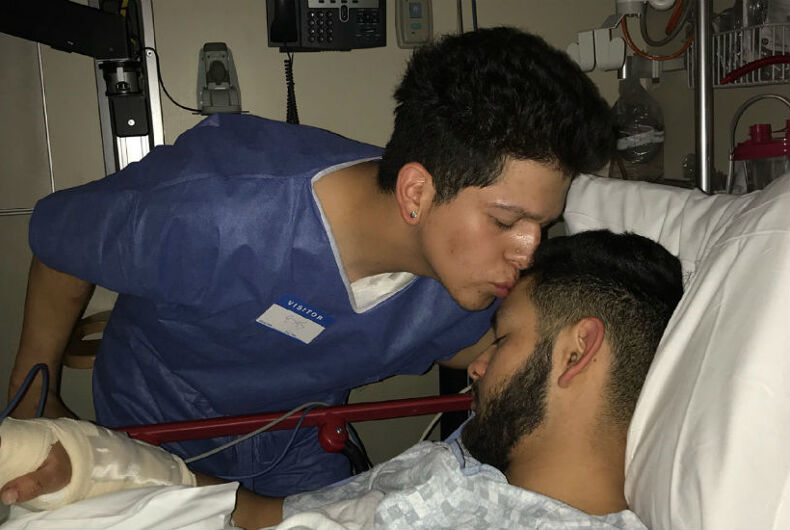 Chris Huizar, 19, and Gabriel Roman, 23, were holding hands and walking home from an LGBTQ nightclub in Denver when they were attacked this past Saturday night.

They said that they heard someone shout “fucking faggots.”

“We were just walking, and I guess he didn’t like what he saw,” said Huizar.

The man then pulled out a knife and stabbed them multiple times.

“I remember him pulling me back and I think that’s when I got stabbed in my back,” said Roman.

“We’re running and I didn’t realize how bad it was until he’s like, ‘My hand!’ and that’s when I took my shirt off and I wrapped it around and there was blood everywhere, like so much blood,” said Huizar.

“I’m thinking, like, my boyfriend is going to die,” said Huizar.

Huizar was stabbed in the neck. Doctors said that the attacker barely missed his lung.

Roman was stabbed in the hand, and then in the back as he turned to run away.

Denver Police say that someone has been arrested for the crime and is being held on charges of aggravated assault. The attack is being investigated as a hate crime.

Huizar said that they won’t be deterred from showing who they are. “We are an open book. We don’t care what anybody else has to say so we always hold hands and be ourselves in public,” he said.

The couple has started a GoFundMe page to pay for medical expenses and lost wages. They have raised $3667 of their $5000 goal so far.

LGBTQ activists warned cops about mass shooter before he attacked. They didn’t listen.