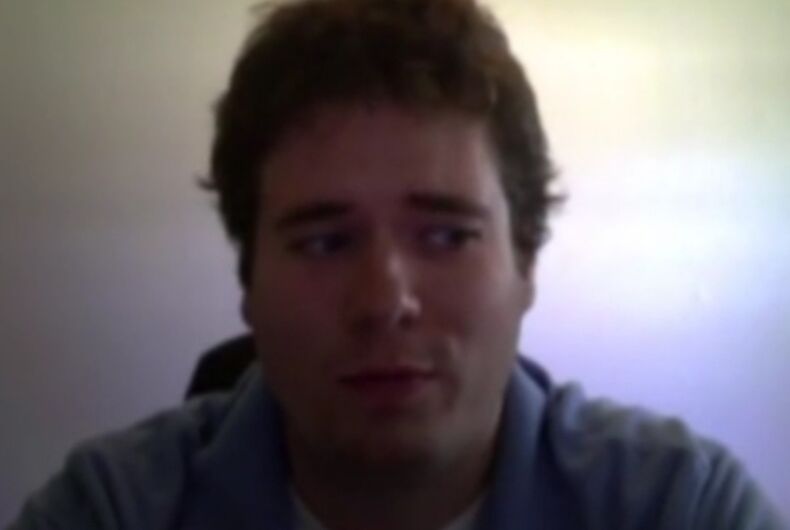 Last Thursday, Alexander Tilghman opened fire at a restaurant in Oklahoma City, injuring three girls and women. One man was injured trying to escape as well.

The shooter was shot dead by bystanders.

An LGBTQ newspaper is saying that Tilghman had a history of violent rhetoric about transgender people that was brought to the attention of police.

This past January, the Oklahoma LGBTQ newspaper The Gayly interviewed Tilghman after he posted hundreds of flyers around the city. The flyers warned people about “DEMONS IN CLONED TRANSEXUAL BODIES” and directed them to his YouTube channel, Yahweh Rules2.

“Well pretty much the entire population are transexual clones or robotoids,” Tilghman told The Gayly. “Satan turns men into women and women into men, it’s hard to know unless you’re aware of it.”

But he didn’t like people living with disabilities. “Retards are a mockery of gods creation, same with deformed people, etc.”

The Gayly said they talked to Oklahoma City police twice about Tilghman in January. An officer visited their office and asked for copies of the transcript of the interview.

“This guy needs to be on our radar,” an officer told the LGBTQ newspaper.

Tilghman posted videos on YouTube and Facebook where he questioned whether he was the only real person and if everyone else was a computer program or a demon.

He said he needed help from “a real human” and was “really losing it.”

The FBI also released a statement saying that they were aware of Tilghman before the shooting. Someone called their tip line to tell them about Tilghman’s disturbing videos on YouTube.

“The caller reported concerns about a YouTube channel associated with the subject, but did not report any potential threat of violence and did not have any knowledge of the subject possessing any weapons,” the statement said. “Based on this information, and following our standard protocol, no further investigation was warranted.”

“The content found on this channel at that time was identified as First Amendment-protected speech, and no further action was taken.”

Tilghman was a licensed security guard. He appears to have legally obtained the gun he used in the shooting.

Police don’t know why Tilghman targeted the restaurant. He showed up for the shooting with the gear used at shooting ranges to protect people’s eyes and ears, showing that the attack was premeditated.

Is Pope Francis pro-LGBTQ or not? The Church doesn’t know either.