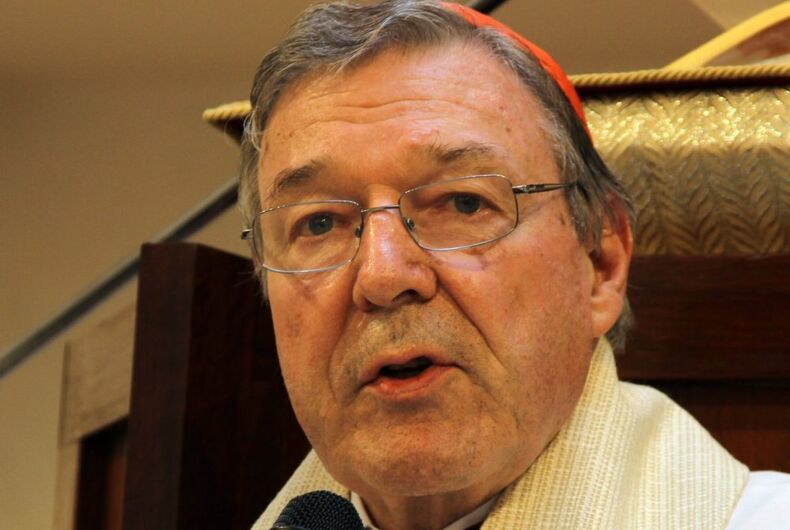 The highest-ranking Catholic official to be charged with sex offenses has been ordered to stand trial.

Australian Cardinal George Pell, 76, the Vatican’s finance chief and a former top adviser to Pope Francis, pleaded not guilty today in a court in Melbourne. He’ll face a jury trial on charges described as “historical sexual offenses” from multiple reports of sexual misconduct.

They relate to purported activity at a pool in Ballarat, northwest of Melbourne, in 1970, and at Melbourne’s cathedral in the 1990s.

His case coincides with a national inquiry into child sexual abuse. He had faced even worse charges, Radio Australia reported, but today the judge has struck down the most serious of them, including an incident at a Ballarat cinema, at a showing of “Close Encounters of the Third Kind.”

Pell, the highest-ranking Catholic in Australia, is the former archbishop of both Sydney and Melbourne, the nation’s two largest cities. He returned to Australia from the Vatican to face the charges, and he has turned in his passport.

Pell is known for his anti-gay statements and teachings. In 2002, he refused communion to openly gay and lesbian Catholics. He lectured them, saying, “God made Adam and Eve, not Adam and Steve, and important consequences come from this.”

“Our Judeo-Christian religious tradition allows men and women sexual expression within the bounds of family life, a sexuality which is life-giving,” he said. “Homosexual acts are contrary to the natural law. They close the sexual act to the gift of life.”

Pell was a member of the Catholic Church’s key ideological body, the Congregation for the Doctrine of the Faith, which also attacked homosexuality.

In 2012, he argued against same-sex marriage. He said children shouldn’t be denied a mother and father. Same-sex marriage became law in Australia on Dec. 9, 2017, after politicians used a national vote by mail to determine LGBTQ rights.

After today’s proceedings, Lisa Flynn, a lawyer who has represented hundreds of abuse survivors in Australia, told Agence France-Press that the process proved no one was above the legal system.

“The charging of Pell for these alleged crimes reinforces that people should be and are treated equally in the eyes of the law,” she said.

“This is a promising step forward for victims of sexual assault.”