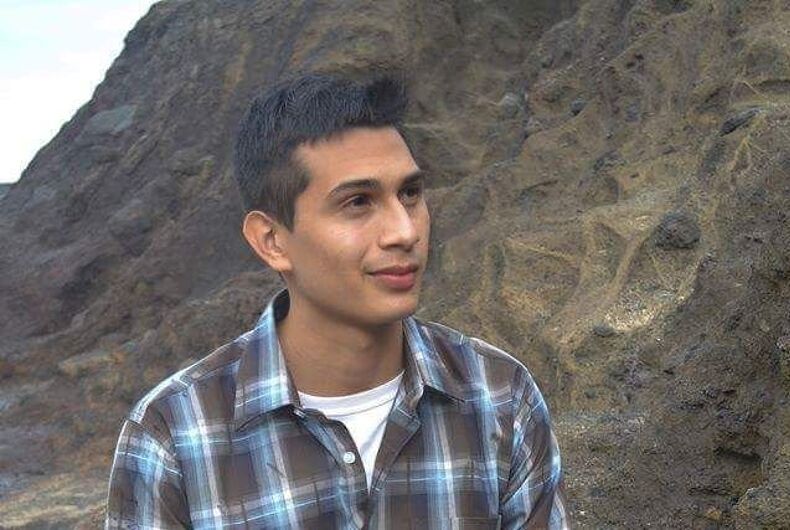 A gay student was found bruised, burned, and unconscious by railroad tracks in California and now his family wants answers.

Aaron Salazar, 22, is a student at Portland State University from Colorado. He was traveling from Denver to Portland on an Amtrak train earlier this month.

On May 15, he was found by railroad workers by the train track in Truckee, California. He was taken by helicopter to a hospital in Reno, and he is still in a deep coma.

In addition to bruises, Salazar suffered damage to his brain stem, a broken pelvis, and the inside of his thighs were severely burned.

The crime is being investigated by a federal law enforcement agency that has jurisdiction on Amtrak trains.

In a statement, APD told Patch that Salazar’s injuries don’t “suggest criminal intent.” His family says that APD is looking into the possibility that this was a suicide attempt, that Salazar jumped out of the window of a moving train.

The family says that Salazar’s clothes weren’t torn and he had no injuries on his limbs.

“There’s no scrapes, there’s no road rash — none of that, all of his injuries are upper body,” Trujillo said.

“They keep trying to push the narrative that he jumped from the train, but we believe he was attacked and this might’ve been a hate crime,” said Austin Sailas, another cousin.

The family says that doctors told them that they believe Salazar’s injuries look like he was beaten, but they don’t want to put it in writing because of the ongoing APD investigation.

“We called Amtrak that day and they told us if he had opened any windows or doors there would have been notifications triggered,” Sailas said. “They also told us no incidents were reported on that train about any open windows or anything.”

They also say that Salazar showed no signs of suicidal behavior, that he was looking forward to his graduation. They also cite a text message he sent his great-grandmother just before the train got to Truckee.

“I have a layover before getting on the next train,” Salazar wrote. “I made a friend on the train and we’re going to go get some food and explore.”

An hour later his body was found beside the tracks.

Salazar was also found with almost $300 in his wallet, so his family doesn’t think it was a robbery. “He’s gay — maybe a hate crime? That and he just isn’t the type of person to just jump from a train,” Trujillo told the LA Blade.

Both Trujillo and Sailas said that the APD has not looked at Salazar’s computer or phone, even though they took them both.

Despite being trapped in a train for hours with his new “friend” around other passengers, Amtrak has not identified the other man or questioned other passengers about the mysterious stranger Salazar mentioned in his text to his grandmother.

Sailas has started a GoFundMe page to raise money for medical expenses.

“This kind soul who has never hurt anyone, and has only spread positivity and love was beaten and left by the railroad for dead,” Sailas wrote. “This young man does not deserve the horrible things that happened to him, but he is fighting for his life and needs our help and positive vibes.”