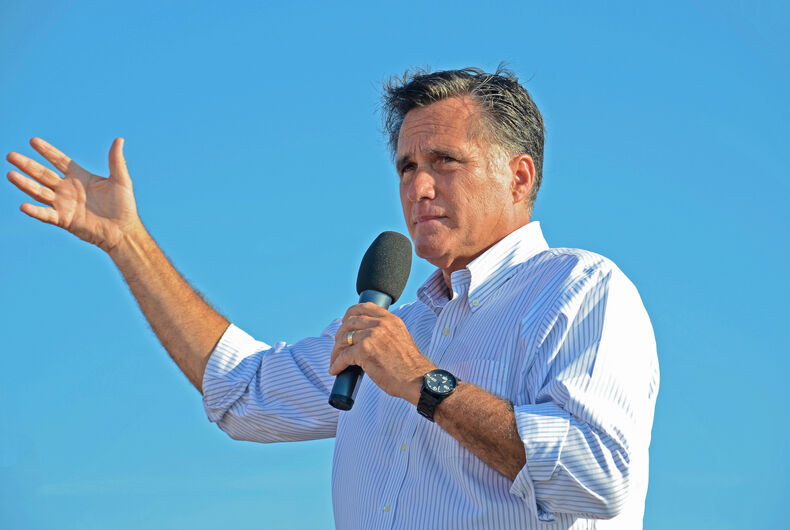 If Mitt Romney — the first Mormon presidential nominee of a major party — can’t get elected in Utah, then where can he get elected?

Despite endorsements from president Donald Trump and retiring senator Orin Hatch, Romney came in second after a raucous state party convention. He was beaten out 50.18 percent to 49.12 percent by Mike Kennedy, a three-term state representative with nowhere near Romney’s national profile or name recognition?

It appears the former Republican presidential nominee isn’t conservative enough — or anti-LGBT enough — for Utah Republicans. In fact, he wasn’t even enough of a Utahn. Kennedy portrayed Romney as an interloper saying, “We need a candidate who’s actually lived, worked and raised a family in the state of Utah,” upon entering the race just a month ago.

Kennedy’s statement may also have been an indirect slam against Romney’s history as governor of Massachusetts. While the state’s gay and lesbian couples gained the right to marry under his watch, Romney made clear his opposition not only to same-sex marriage but also civil unions.

In 2006, no doubt with an eye on the 2012 GOP presidential nomination, Romney announced his support for the Federal Marriage Amendment, which would have federally defined marriage in the U.S. Constitution as the union of one man and one woman.

An ad run by the Human Rights Campaign during the 2012 election encapsulates Romney’s anti-LGBT record.

Still, Republicans view Romney as a “liberal” on LGBT issues.

It happens that’s not enough for Utah Republicans. Delegates at the state convention donned t-shirts labeling Romney a “RINO”; a “Republican In Name Only.”

Even getting, and welcoming Donald Trump’s endorsement, after saying that he would reject it, didn’t seem to help Romney.

Or maybe Utahns know a political opportunist when they smell one.

Kehlani just came out after kissing Demi Lovato on stage