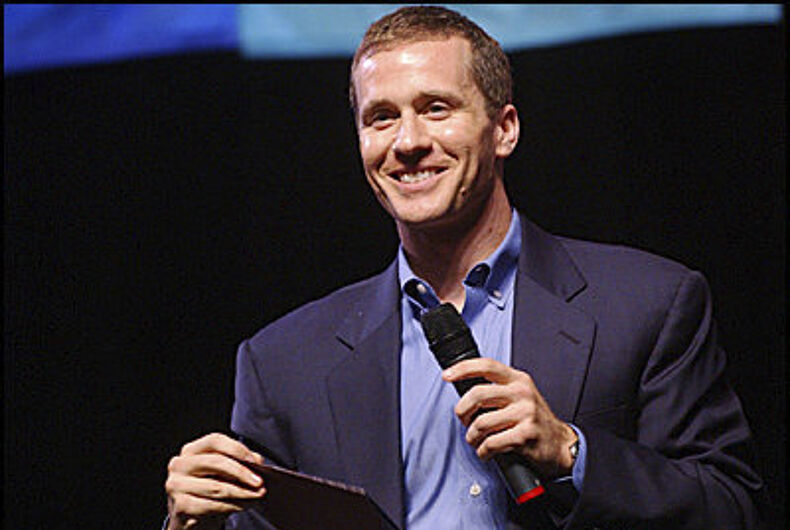 You have to hand it to Republican politicians who style themselves values candidates. When they fall off the wagon, they do it with a giant thud.

Case in point is Missouri Gov. Eric Greitens. Greitens has already admitted to an extramarital affair and was indicted in February on a felony invasion of privacy charge for allegedly using a nude photo of his mistress to blackmail her.

As if that wasn’t bad enough, it’s gotten worse. A report just released by a special committee of the state legislature is filled with tawdry details of Greitens behavior.

Among the acts the accuser says he committed against her will was binding her hands to pullup rings in his home gym, spitting in her mouth and hitting her in the face with this penis. Greitens is also alleged to have taken a nude photo of the woman while she was tied up to hold as leverage over her, since she was also married.

Greitens, who has a history of anti-LGBT rhetoric, is fighting all the charges. Already, many of the most powerful Republicans in the state have indicated that Greitens either has to resign or face impeachment.

But if you think that’s a sign that maybe Republicans will turn on another alleged sexual assaulter, Donald Trump, you’d be mistaken.

There are three key reasons why Greitens’ case is not a blueprint for Trump’s case. First and foremost, the Missouri Republican party despises Greitens and has been fighting with him ever since he was a candidate.

In the words of one political journalist, “He doesn’t make friends, he destroys enemies. He doesn’t forge alliances; he takes hills.”

During his gubernatorial campaign, Greitens went out of his way to outdo Trump by condemning politicians as “vultures [who] flock to rotting meat — and they feed off the carcasses of vice.” Trump at least has the occasional kind word to say about his fellow Republicans.

Greitens has never demonstrated that he has a hold on a core group the way that Trump does. Missouri Republicans have nothing to fear by taking him on. They can find a more amenable replacement easily enough.

Greitens also hasn’t been able to draw upon an outpouring of evangelical support. He certainly courted evangelical voters during his campaign, but as the nation’s only Jewish governor, he can’t wrap himself in the cloak of Christian forgiveness the way other disgraced politicians have.

In any case, evangelicals can turn their sights to Josh Hawley, the state attorney general who is running for Senator. Hawley is the genuine article for evangelicals, having served as a lawyer for the right-wing Becket Fund for Religious Liberty, including the Supreme Court’s Hobby Lobby case.

Compared to Greitens, Hawley is a much smoother candidate, although he has his moments.

In January, comments surfaced of Hawley proclaiming that the sexual revolution was responsible for the rise in human trafficking.  Needless to say, Hawley made those remarks to a religious right group.

Hawley has called on Greitens to resign, a move that would have the benefit of making Hawley the star Republican in the state.

So, for all of those reasons, don’t think that just because some Republicans in Jefferson City take on their erring executive leader, it’s a sign of things to come. In thise instance, what happens in Missouri stays in Missouri.

Cory Booker annihilates Mike Pompeo during confirmation hearing: ‘Is being gay a perversion?’

Take a deep breath. John Boehner has a new gig selling weed & it may be good for LGBT people.