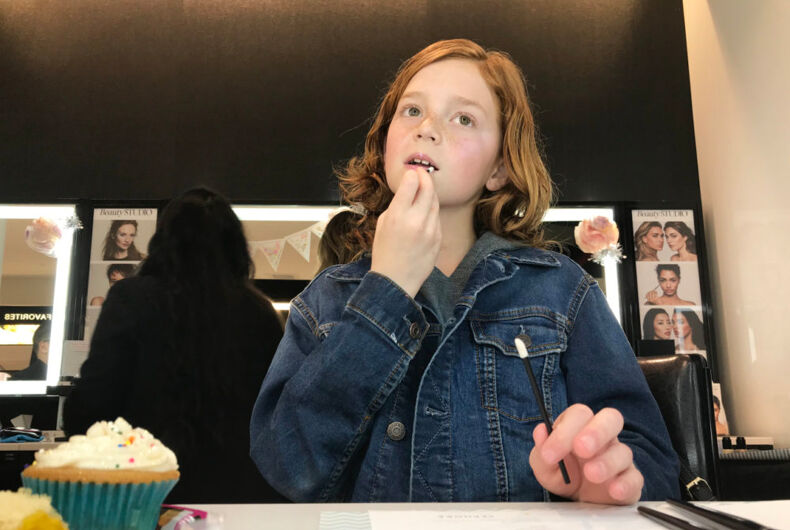 Lori Duron’s gender non-conforming son, C.J., is special. While his parents already knew this, staff at Sephora, a cosmetics store, proved it.

C.J. had been bullied at school by a group of former friends, his mother wrote in a blog post that’s quickly going viral for all the right reasons.

“They said they couldn’t hang out with him because he was gay. They stabbed him with pens. They pushed him, kicked him and pinched him,” she wrote. “They stole his lunch and smeared their sandwiches on him. They told him he was invisible and nobody would notice if he was gone. It went on for months.”

“Matt and I had never seen our child in so much pain. He sobbed in our laps when he got home from school and couldn’t fall asleep at night.”

C.J.’s favorite store is Sephora and his parents started taking him multiple times per week to help him escape his troubles by attending free makeup classes. Slowly, the 11-year-old made friends with the staff. As the child grew to trust them more and more, they found out C.J. was being bullied at school and decided to do something to support him – especially when they discovered his former friends had “ruined his birthday month.”

“Our Sephora team stayed long after their shifts had ended to throw C.J. an after-hours, invite-only, festival-makeup-themed belated birthday party,” Duron shared. “It was the birthday makeover our son desperately needed.”

“The Sephora team had decorated lighted-mirror workstations for C.J. and his five best girlfriends (none of whom go to his school). When the kids saw that a makeup bag full of swag and samples were awaiting each of them, they squealed and took their seats.

“The Sephora team gave C.J. and his girl friends a custom class on teen makeup inspired by festival season. Which means there was a lot of shimmery pastels, glitter and highlighter.”

And once they were fully made up, the staff had a few more surprises for the youngsters.

“When every square inch of their cute little faces was covered in makeup, the group snacked on edible glitter-covered vegan cupcakes prepared and delivered by Miss Dre, a Sephora team member from another store,” Duron wrote.

“High on sugar and shimmer, the group had the store themselves. They wandered the aisles carrying little shopping baskets on their arms like designer handbags. They giggled and called each other over to look at colorful products.

“Before we left, the Sephora team gave C.J. a birthday card filled with sweet and supportive handwritten notes. When we got home, C.J. sat it by his bed. That’s where it remains, to be read regularly.”

If you’re not already in tears at the staff’s generosity and thoughtfulness, Duron’s closing sums up the gift those women gave to C.J. and the lasting impact it will have.

“Sephora helped save my son. They took his worst birthday and made it over into his best birthday. After some of his darkest days, Sephora gave him a bright night and taught him that fearless is the new flawless.”

The Simpsons tackled Homer’s homophobia in the 90s, but won’t talk about the problems with Apu now

After this employee wore a pro-LGBTQ shirt, things turned ugly at work