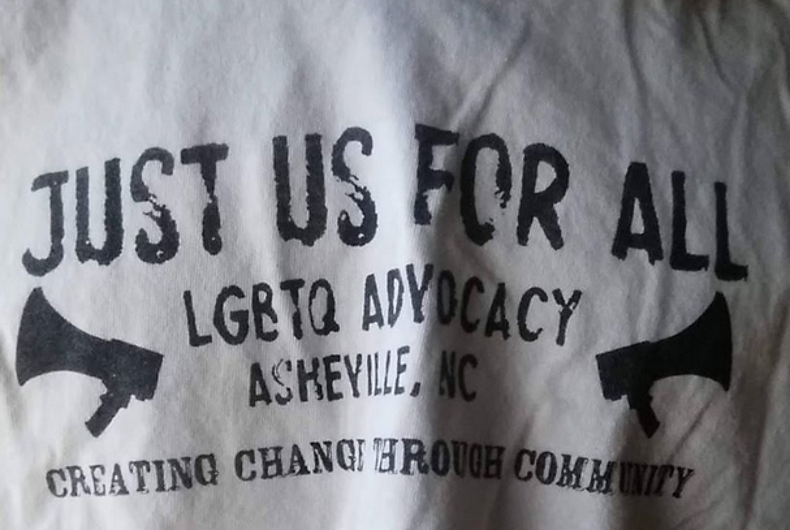 A manager was fired for standing up for a gay employee who was told that he was “advertising” who he wants “to have sex with” by wearing an LGBTQ T-shirt.

Robyn Tylar Sklar works at an herbal supplement store in Elizabethtown, Kentucky. Last Friday, he wore a white T-shirt that read “Just Us For All/LGBTQ Advocacy/Asheville, NC/Creating Change Through Community.”

Saur wrote that there’s no dress code at his workplace, but he was called into the owners’ office and told that he was “advertising who I want to have sex with.”

“My manager then went into the back office, where the owners met with her in relation to what the shirt read, my manager defended me and stated that they were being discriminatory,” Saur wrote on Facebook.

He said that the owners avoided talking to both him and his manager for the rest of the day and on Saturday.

On Sunday, they sent a text message to both of them telling them they didn’t need to come in on Monday. There are only three employees at the store.

The manager was fired on Tuesday, and Saur was told to “hang tight for a while” and doesn’t know if he’s going to be fired.

“The owners are retaliating against my manager for informing them of their discriminatory practice, and they are being discriminatory towards me because I wore a shirt to my job with LGBTQ written on it,” Saur said.

Saur wrote a letter to his employers explaining why he wore that T-shirt, and how it wasn’t a way to hit on the customers.

“I experience discrimination on a daily basis – I can’t even go to Kroger without being called ‘fag,'” he wrote.

He told them about several times he experienced intense anti-gay discrimination, including getting beat up in high school and the father of a boy he dated threatening to kill him.

“So, I’m not ‘advertising my sexuality,'” he wrote, “I’m bringing attention to the fact that LGBTQ individuals are still seen as second-class citizens who have to fight for their freedom.”

Editor’s note: This post has been updated. Originally, it incorrectly said that the store was located in Asheville, North Carolina.

If you need an excuse to shop at Sephora, this is it