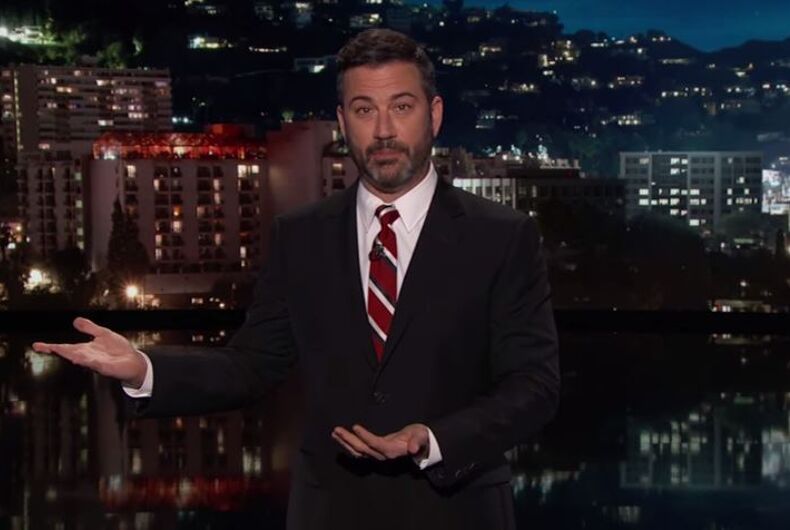 Jimmy Kimmel responds to his critics after his recent stand for healthcare. Photo: YouTube/Jimmy Kimmel Live!

Late night comedian Jimmy Kimmel issued an apology for several jokes yesterday, including anti-gay jokes he made about Sean Hannity and Donald Trump.

The Jimmy Kimmel Live! host spent a good part of last week in a Twitter feud with Fox News host Sean Hannity. Kimmel had made a joke about about Melania Trump’s accent, and Hannity – who spent the Obama years calling Michelle Obama racist and making fun of her appearance – attacked Kimmel for making fun of Donald Trump’s wife.

During the exchange, Kimmel made several gay jokes about Hannity. In one, he asked if Hannity bottoms for Donald Trump. Then he said that Hannity has a crush on him. And in another tweet he implied that Hannity engaged in oral-anal sex with Trump.

Don’t worry – just keep tweeting – you’ll get back on top! (or does Trump prefer you on bottom?) Either way, keep your chin up big fella..XO https://t.co/R4QJCoGYCL

I’m starting to think SOMEONE has a crush on me! https://t.co/PPhSOqBeWn

When your clown makeup rubs off on Trump’s ass, does it make his butt look like a Creamsicle? https://t.co/DEhmfOh0Hn

Since the point of the jokes was to call Hannity gay, some people on Twitter called out Kimmel’s homophobia.

And again from Jimmy Kimmel! Lazy humor to consistently use gay men as punchlines or homophobic? pic.twitter.com/LBYIVbs3Dm

Kimmel has expressed support for LGBT equality in the past, sometimes incorporating equal rights into sketches.

But that doesn’t mean that he now gets a free pass to make gay jokes.

“In the way that ‘hipster racism’ was coined to describe white people being ‘ironically’ racist to show that they weren’t racist (while mostly being racist), comedians employ bottom-shaming jokes to show that they ‘get’ gay culture and are just having fun with it,” wrote Ira Madison III at The Daily Beast.

But while there were a few people legitimately calling out the gay jokes, the vast majority of people calling out Kimmel’s homophobia were rightwingers pretending to care.

Liberals of course quick to gloss over Jimmy Kimmel insulting a (legal) immigrant for her accent, making rape jokes about a teen girl, and making homophobic insults…because he reluctantly said he was sorry (he got in trouble).

Stay classy libs. This is why #TrumpWon #MAGA #KAG

So Kimmel issued an apology “to those who took offense” yesterday.

This isn’t the first time Kimmel has apologized for anti-LGBT jokes. Last year, he said he was “sorry” to Caitlyn Jenner for making fun of her transition.

While it might not be that satisfying, it’s a sign of progress that these sorts of anti-gay jokes – where progressive, straight people find creative ways of saying “Hahaha, you’re gay” to each other – are finally getting called out.

Ellen talks with the first gay Navy Spouse of the Year