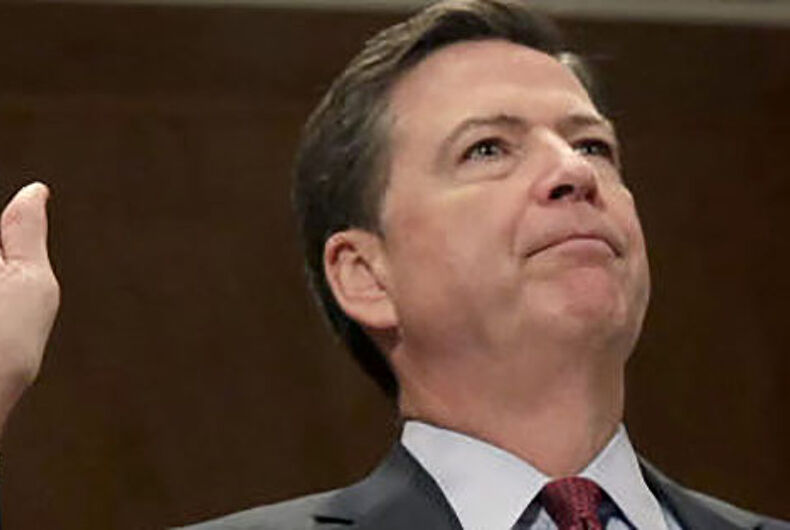 With the upcoming publication of former FBI Director James Comey’s memoir,  A Higher Loyalty: Truth, Lies, and Leadership, the war between President Trump’s loyalists and the truth is about to escalate.

By his own admission, Trump fired Comey last year for probing Russian interference in the 2016 presidential election. The stakes are even higher now that Trump’s impulsive move led to the appointment of Special Prosecutor Robert Mueller, who just raided the office and home of Trump’s personal attorney Michael Cohen.

But before the exchange of verbal war is fully launched, it’s worth savoring Comey’s depiction of Trump as a tanning-bed habitue who knows virtually nothing.

As excerpts from Comey’s book come out in the press, Comey’s description of two of Trump’s characteristics stand out: The president is essentially a Mafia don and he’s obsessed with water sports.

Comey would know about mob bosses. He was a federal prosecutor who went after some of the biggest Mafia leaders.  So when he encountered Trump and his lackeys, Comey was struck by how much the group resembled the mob: “The silent circle of assent. The boss in complete control. The loyalty oaths. The us-versus-them worldview.”

Comey goes even further, saying that Trump’s pressuring him for personal loyalty reminded Comey of a “Cosa Nostra induction ceremony.”

But for sheer hilarity, the president’s obsession with one part of the Steele dossier can’t be topped. The dossier includes many serious, if unsubstantiated charges, that paint Trump as in the pocket of Russia for years.

But impugning Trump’s patriotism doesn’t bother him. What does is the most salacious part of the dossier: that a tape exists of Russian prostitutes urinating on the bed used by then-President Obama and wife Michelle, while Trump looked on in enjoyment.

According to Comey, Trump brought up the water sport allegation at least four times, starting with their first meeting, in January 2017. Comey says that Trump brought up “what he called the golden showers thing” and “strongly denied the allegations, asking — rhetorically, I assumed — whether he seemed like a guy who needed the service of prostitutes.”

At another point, Trump said that he wanted the allegations proven false to give Melania peace of mind.

“It bothered him if there was ‘even a one-percent chance’ his wife, Melania, thought it was true,” Comey writes.

Across the board, Trump’s denials have the air of someone trying too hard.

“I’m a germaphobe,” Trump told Comey. “There’s no way I would let people pee on each other around me. No way.”

Comey seems to relish giving Trump shade on the issue. “I decided not to tell him that the activity alleged did not seem to require either an overnight stay or even being in proximity to the participants,” Comey writes. “In fact, though I didn’t know for sure, I imagined the presidential suite of the Ritz-Carlton in Moscow was large enough for a germaphobe to be at a safe distance from the activity.”

As for using Melania as an excuse, Comey says he was baffled. “I’m a flawed human being, but there is literally zero chance that my wife would think that was true,” he writes. “So, what kind of marriage to what kind of man does your wife think [that] there’s only a 99 percent chance you didn’t do that?” (For the record, Comey says that the tape may exist.)

Of course, now we know that Trump seems to like things a little less than vanilla, according to Stormy Daniels. In his first meeting with her, Trump supposedly dropped his trousers so that she could spank him with a copy of a magazine with his picture on the cover.

Trump has already resorted to his usual presidential rhetoric, branding Comey a “slime ball.” But the attention that Comey will attract, both from the media and from readers (it’s already the #1 book on Amazon) means that Trump is in for a rough stretch.

The greatest irony is that Comey is probably responsible for Trump’s election in the first place. His decision to announce that the FBI was looking into Hillary Clinton’s emails again just two weeks before the election has been cited as the factor that probably turned enough votes against her to deliver the White House to Trump.

In his memoir, Comey justifies his extraordinary action on the basis that he assumed Clinton would be elected. He didn’t want to be accused by Republicans after the election that he buried the information so that Clinton could win. Instead, Comey gave the nation a man by his own description is “unethical, ad untethered to truth and institutional values.”

Thanks a lot, James.