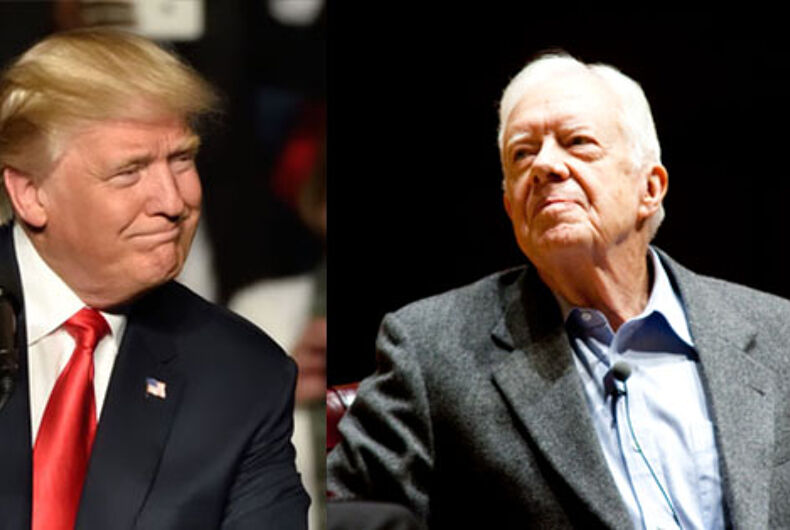 Former President Jimmy Carter’s legacy can best be summed up like this: His presidency was about peace and the common good. The Baptist minister and peanut farmer turned politician is best known for his philanthropic and civil rights work post-presidency.

An avid supporter of Habitat for Humanity, Carter’s appearances in the news are generally related to helping someone else get a foot up. He has repeatedly said his biggest accomplishment as President is that under his watch, US soldiers didn’t fire a single shot or drop any bombs.

“We kept our country at peace. We never went to war. We never dropped a bomb. We never fired a bullet. But still we achieved our international goals,” Carter said in 2011.

“We brought peace to other people, including Egypt and Israel. We normalised relations with China, which had been non-existent for 30-something years. We brought peace between US and most of the countries in Latin America because of the Panama Canal Treaty. We formed a working relationship with the Soviet Union.”

Related: Did the White House put the kibosh on humanitarian honor for Jimmy Carter?

So with a greedy real estate developer who constantly threatens other nations with nukes, what advice would Carter give to Trump?

“I pray that he would keep our country at peace and not exaggerate or exacerbate the challenges that come up with North Korea, in Russia or in Syria,” Carter told the Associated Press. “I hope he realizes very profoundly as I did, and as other presidents have done, that any nuclear exchange could involve catastrophe for all human beings.”

But what about Trump’s evangelical base that keeps praying for him to continue attacking pregnant women and LGBT people? They aren’t exactly seeking equality and human rights, after all.

“I took a position of wanting to see balance between Israel and the Palestinians,” Carter said, as he explained that his actions had started the exodus of evangelical Christians to the Republican party. “Evangelicals are naturally inclined from a religious point of view to be loyal to Israel.”

Still, he couldn’t resist pointing out the hypocrisy inherent in their stance, since evangelicals also tend to believe “that the Jews should also all become Christians — that’s not often mentioned.”

The former President added that the Democrats’ positions on LGBT rights and abortion also helped white evangelicals move to the Republican party. It shouldn’t be surprising then that they voted overwhelmingly for Trump despite his obviously inappropriate behavior and garishness.

He thinks the solution is to emphasize equal opportunity and fairness for all as a way of bringing white US Christians to a more “progressive” view of politics.

“There are reasons to have concern for the future,” Carter said, “but the moral principles and ethical principles that have been guiding lights are still there.”

The trailer for ‘Pose’ just dropped & it looks fabulous