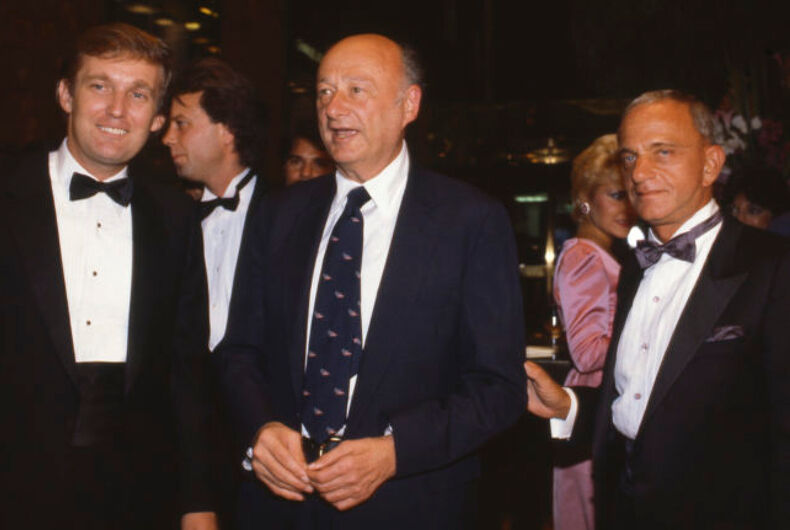 The FBI’s raid on the offices and home of Michael Cohen, Donald Trump’s personal attorney, predictably sent the president into orbit. Apparently, investigators are interested in Cohen’s payment to Stormy Daniels to keep quiet about her one-night stand with Trump, although there’s enough smoke (some of it Russian) swirling around Cohen in general to think there may be other fires too.

Cohen has always portrayed himself as Donald Trump’s fixer.

“It means that if somebody does something Mr. Trump doesn’t like, I do everything in my power to resolve it to Mr. Trump’s benefit,” Cohen has said. “If you do something wrong, I’m going to come at you, grab you by the neck and I’m not going to let you go until I’m finished.”

But Cohen is just a pale copy of Donald Trump’s original fixer, Roy Cohn. Cohn may have the distinction of being the most evil gay man in American political history, ruining reputations and running roughshod over legal principles. His villainy is immortalized in Angels in America.

Cohn was also the man who is Trump’s ideal for a personal lawyer.

Cohn began his career in the Cold War era. As an aide to Sen. Joseph McCarthy, Cohn not only helped lead the targeting of civil servants deemed Communist tools, but also of purging gay government employees on the grounds that they were security risks.

Cohn went on to become a lawyer for Mafia dons and assorted public figures in New York, despite being indicted himself multiple times. When he met Trump in the early 1970s, Cohn had cemented his reputation for ruthlessness on behalf of less-than-savory characters.

His first job for Trump was aggressively defending the real estate developer from a federal lawsuit claiming racial bias in Trump’s rental policies. Soon Trump was using Cohn for any other troublesome issues that arose. Trump loved how Cohn made problems evaporate.

“We just tell the opposition Roy Cohn is representing me, and they get scared,” Trump said at a birthday party for Cohn.  “He never actually does anything.”

But when Cohn was wasting away from AIDS, Trump started moving his legal business elsewhere. The man who boasted “I made Trump successful” found that loyalty was a one-way street with his client.

Trump may have abandoned Cohn at the lawyer’s lowest point, but the president still misses him. “Where’s my Roy Cohn?” Trump asked last year as the Russia investigation heated up.

The lawyer who will do anything – ethical or not – to protect his client is exactly the kind of lawyer that Trump expects to represent him.

That’s one reason why Trump hates Jeff Sessions so much. For all his flaws, Sessions sees his job as Attorney General to uphold the law. Trump sees Sessions’ job as to protect him.

Michael Cohen was a handy substitute for Roy Cohn, but as a lawyer he leaves a lot to be desired. He has made a series of stupid moves that have put him and his client in legal jeopardy.

Cohn would never have made those mistakes. True, he might have broken the law to do so, but from Trump’s perspective, that was his job.

Of course, what works when you’re a developer doesn’t work when you’re president. Someone needs to tell Trump that hard truth.