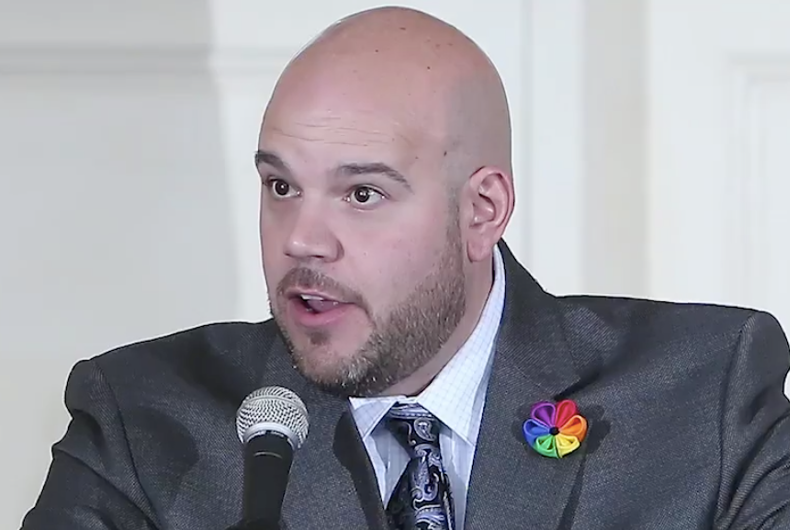 A 15-year educator in Yonkers, N.Y. — who happens to be the only out gay high school basketball coach in the New York City metro area — is now a candidate for state assembly in the 90th district.

Democrat Anthony Nicodemo joins the wave of public school educators who have filed for positions in upcoming elections across the country. He cites the disconnect between state government and the front lines of public education.

“I don’t think most people in Albany know how the education system works,” Nicodemo told News12, in Westchester. “If you’ve done it for 15 years, and you have a vested interest in it, then you understand it.”

The social-studies teacher coaches boys basketball at Saunders Trade and Technical High School. He was named 2013 coach of the year by the Lower Hudson Basketball Coaches Association. That year, as the site Outsports reported, he came out to his team.

Nicodemo is a coach who stands up for his players, and he’s been an advocate for LGBTQ youth as well. He’s been a vocal opponent of the state athletics group moving a state tournament from his area.

After he and another coach ran a charity basketball event earlier this year, and raised $800 for the anti-bullying group GLSEN, an athletic group punished him for improper paperwork preceding the event. Nicodemo has appealed their suspension.

FiOS1 political reporter Andrew Whitman tweeted that Nicodemo is a strong candidate: “Seen lots of tweets using ‘openly gay’ as his #1 description, but he’s a lot more than that. Good luck, coach.”

Seen lots of tweets using “openly gay” as his #1 description, but he’s a LOT more than that.

Nicodemo has won the tip off as the first Democrat to file.

“I’m bringing the fight to Albany,” he said in his campaign-announcement video. “Our kids deserve better.”

My name is Anthony Nicodemo and I'm running for NYS Assembly. I want to see #Yonkers continue to grow and receive its fair share from Albany. There would be no greater honor than to represent my community as the next Assemblyperson of the 90th district. #Nicodemo4NY #BlueWave pic.twitter.com/YaBQ7WWuLl