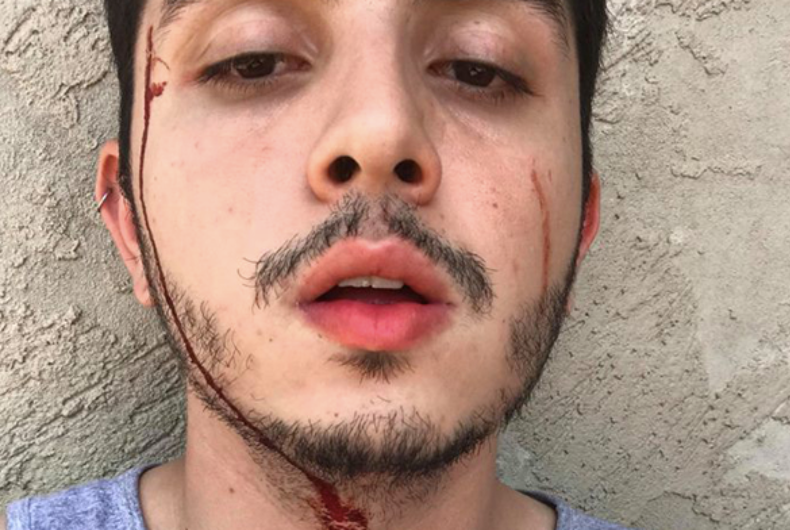 A 22-year-old man in São Paulo reports he was attacked by his homophobic sister and brother-in-law — a signal that violence is continuing against LGBTQ people in Brazil.

The man posted a selfie of his bloody face after a family argument. He wrote that the two family members used religion to justify the attack.

“According to them and the doctrine of his church, I deserved to be dead now for being gay,” he reportedly wrote. “The words I heard hurt a lot more than the bruises I won.”

Brazil is a land of contrasts for LGBTQ people. São Paulo has one of the largest Pride celebrations each year, with estimates of 3 million in attendance.

The nation, with a reputation for tolerance, legalized same-sex marriage in 2013, and it was one of the first countries to allow gay adoption. In 1993, it was an early leader in HIV support, as it offered free retroviral medication.

Yet it’s also a religious country, with a quarter of the population evangelical Christian, and a country bolstered with a culture of machismo.

Violence against LGBTQ people reached epidemic levels in 2016, the year of its Summer Olympics in Rio de Janiero, The New York Times reported. Just this year, the murders of two LGBTQ people have rocked the country.

Transgender woman Dandara dos Santos, 42, was beaten, tortured, shot and then bashed in the head Feb. 15, 2018, in northeastern Brazil. Phone video of the attack shocked the country. Police arrested the five men who attacked her, and they were sentenced to prison in early April.

Then, just a  month later, on March 14, LGBTQ black activist Marielle Franco was assassinated in northern Rio de Janiero. A Rio city councilor who identified as bisexual, Franco was a vocal critic against police violence. She and her driver were gunned down while she was making a political speech.

The multinational TV network teleSUR reported their deaths prompted thousands to rally in her memory, but Amnesty International also reports that their killings killings remain unresolved.

Brazilians continue in the streets today throughout the country in response to the assassination of Marielle Franco, prominent human rights advocate and leftist councilwoman.#MariellePresente pic.twitter.com/gE13qNKyuV

Panic! At The Disco’s tweet nails how easy it is to use correct pronouns