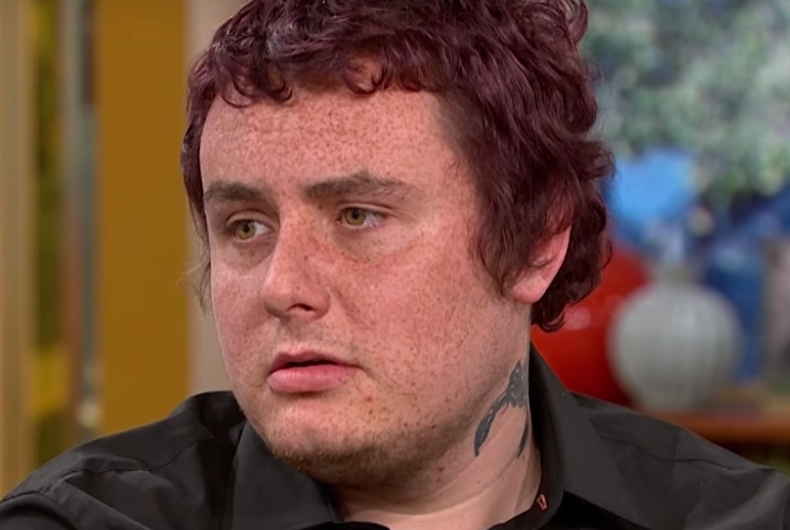 On Tuesday, The Mirror ran an article about Scott Purdy, 23, who claims that muscle relaxant and painkiller Pregabalin turned him from a “hot blooded heterosexual” to a gay man after he broke his foot while go-karting.

He is the first known person to claim that this medication changed his sexual orientation.

“I noticed my libido for women had gone and I was wanting male attention,” he said, saying that the pain medication – which is also used to treat generalized anxiety disorder – made him gay.

Nigel Purdy, 57, told the Daily Mail that he always thought his son was bisexual.

“He has told me in the past that he admitted that he started experimenting with a lad when he was younger,” Nigel said.

Gail Purdy, 56, has been Scott’s stepmother since he was four-years-old. She said, “We’ve asked him for years if he likes men and he could have just admitted it to us.”

“I know my son and we have always just assumed he was bisexual, as it turns out he is gay,” Nigel said. “It’s just the way he was, even when he was younger. It was his general mannerisms. A parent knows their child. I don’t know why he has waited to come out with all this. His whole life has been a lie.”

Earlier this week, Scott appeared on the British morning show This Morning. He told his story, and This Morning‘s Dr. Ranj Singh told him that the medication probably didn’t turn him gay.

“What it probably does is allow you to be able to express what was already there, I think. That’s my professional opinion.”

Scott’s dad Nigel said that the whole thing was amusing. “I saw that doctor on This Morning yesterday, how he managed to keep a straight face I don’t know.”

And the important thing is that Scott’s happy and honest with himself. If Pregabalin gave him that, then it’s a pretty useful medication.

Christian conservatives want a Senator to resign for talking about homophobia