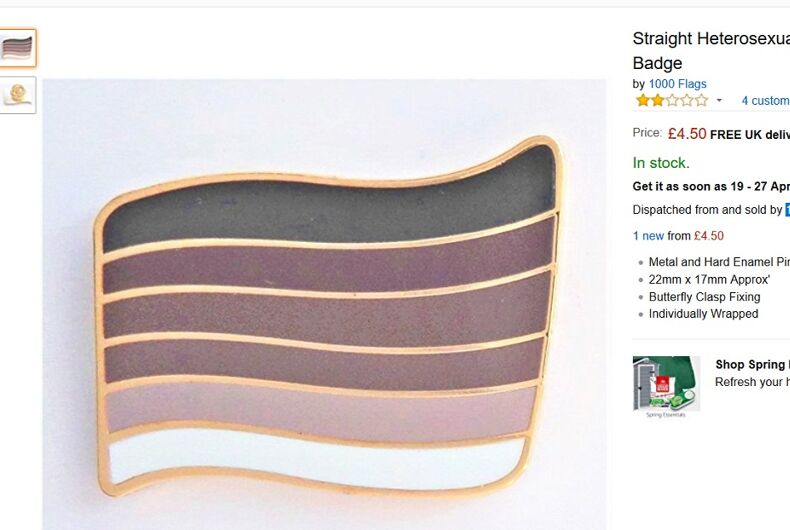 The company 1000 Flags UK is selling a gold-plated pin for 4.50 pounds on Amazon.

1000 Flags UK sells hundreds of flags and products with flags on them, like a rainbow flag makeup brush and “mini prayer flags” from Nepal.

It’s the straight pride flag, though, that got Amazon called out on Twitter.

To all you straight people out there, at last there’s a Straight Pride badge that you can wear as a symbol of the bigotry, hate and oppression you’ve had to overcome! 🏳️‍🌈https://t.co/ZKnZZ01Hzc

Today’s Hero We Don’t Deserve is Steven who left this review on a Straight Pride pin. pic.twitter.com/eDiAX7B7oV

https://t.co/jdO3e3weID : Amazon is selling a Straight Pride badge and people are not happy https://t.co/EpmnNtjIxV pic.twitter.com/QO3GuTURfB

Gay Pride was not born of a need to celebrate being gay, but our right to exist without persecution. So instead of wondering why there isn’t a Straight Pride movement, be thankful you don’t need one 🌟🌈

Others have made fun of the design. This Dutch magazine said it looked like an “eye shadow palette.”

Someone else compared it to salmon.

The straight pride flag looks like a salmon fillet pic.twitter.com/5L6A7d7C5N

Maybe it has something to do with pilots?

Which is probably why 1000 Flags UK didn’t go with the more common grayscale straight pride flag – whoever designed the pin probably didn’t know that it was already a thing.

nothing screams “my marriage is falling apart” quite like the straight pride flag pic.twitter.com/rAJgyk5cP1

The point of “straight pride” is to make fun of LGBT people. There are already lots of venues for straight people to make their sexual orientation known and it’s not a surprise that the people who say they want straight pride tend to also say anti-LGBT things.

The pin only has four reviews so far on Amazon – three negative and one positive. From the way they’re written, it’s unlikely any of them actually bought a pin.

Update: The link to Amazon is dead and a search of the site doesn’t turn up the pin. It appears to have been removed.

Cory Booker annihilates Mike Pompeo during confirmation hearing: ‘Is being gay a perversion?’