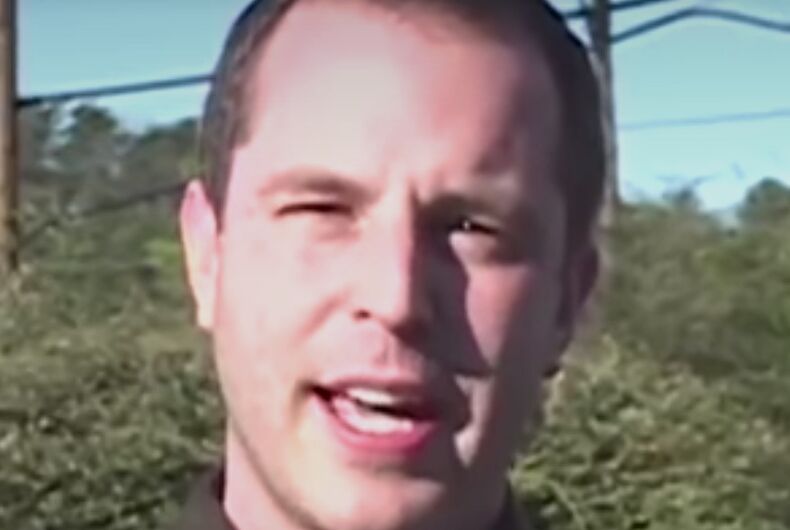 A prominent evangelical youth pastor in Alabama was arrested earlier this week on charges related to having sex with a teen boy.

Acton Bowen, 37, was arrested in Hoover, Alabama, this past Tuesday. He was the founder of the Acton Bowen Outreach Ministries and his website, now offline, described him as “one of the nation’s leading student pastors.”

Police released no information about the victim other than that he’s a boy between the ages of 12 and 16.

“He is currently doing well and has been in a safe environment since police were first notified,” Hoover police Captain Gregg Rector said.

Rector said that Bowen was friends with the victim’s family.

“This is certainly one of the more disturbing cases that we’ve investigated in quite some time,” he said. “Mr. Bowen is in a highly-respected position of influence and he is trusted by many. We believe he betrayed that trust in the worst kind of way.”

Police started investigating the case three weeks ago, and, on Monday, the Jefferson County District Attorney’s Office issued a warrant for Bowen’s arrest.

“When we first learned of these accusations we wanted to make sure we investigated thoroughly in order to get the truth,” said Hoover Police Chief Nick Derzis. “The victim in this case is a brave young man and he should be commended for coming forward.”

Bowen was married to a woman and often talked about his life with her.

Ahhh. A relaxing night with my wife. Home. @DiscoveryID. Wifey. These are a few of my favorite things. ❤

Bowen’s website said that he has been associated with a local church for the last 12 years. He led a Bible study for students in Gadsen, Alabama, and hosted xlroads TV, a web show.

He has already deleted most of his social media accounts, but his Twitter feed is still active. Several tweets show that his politics skewed to the far right.

I’m 97% sure President Reagan would be riding a horse through the Middle East right now punching terrorists in the face.

Statistics show that very few ppl come to Christ bcuz some1 rebuked them 4 saying “Happy Holidays” or 4 letting their kids believe in Santa!

This “women’s” march in DC is one of the most disgusting and pathetic displays of ignorance I’ve ever seen in my life!

He also didn’t seem to like gay people all that much.

Put up a nativity and people get offended. But @Kmart does a commercial of men in boxers shaking their Junk to Jingle Bells and that’s ok?

And one joke Bowen made a few years ago is rather inappropriate in light of recent events.

Parents! Friendly reminder- Keep your kids safe! Instead of knocking on doors this Halloween take them to the trunks of strangers cars.

His book, entitled Escape the Noise, appeared on both the New York Times Best Sellers List and the Amazon Top 100 list.

The book’s description asks if “younger generation’s entire view of freedom has been so corrupted by our culture that they keep running from what liberates them the most.” It offers a “thirty-day program of spiritual development for teens and young adults” and “practical advice for incorporating religious beliefs into our daily lives.”

A search through the book did not turn up any specific references to LGBT people, but Bowen makes several references to “sexual immorality” in the book.

Bowen’s website listed Alabama gubernatorial candidate Scott Dawson as a member of the board of advisors of Acton Bowen Outreach Ministries. Dawson, a Republican, denounces “gay marriage” on his campaign website.

Dawson told AL.com, “I never noticed anything that caused concern – but I was not on his board.” He said that he is praying for Bowen, Bowen’s wife, and “the family.”

Bowen was also a cohost of “Top3” on the JuceTV Network in New York. “Everyone associated with JuceTV was shocked and disheartened to hear of the egregious allegations made against Acton Brown this week,” a JuceTV spokesperson said in a statement. “Our prayers go out to those who may have been hurt and victimized.”